I had a bit of an out-of-body experience today. For the first time, I got my hands on a little bit of McQueen, in the flesh. Or rather, in the fabric.
Oh it was wonderful. I didn't care that it has been worn by my fashion nemesis (a certain Cheryl Cole, but I'm not here to bitch) or many other D-list stars. It was beautiful. It was what all the high street stores that have gone mad with skull prints (All Saints, Topshop, you name it) have aspired to. 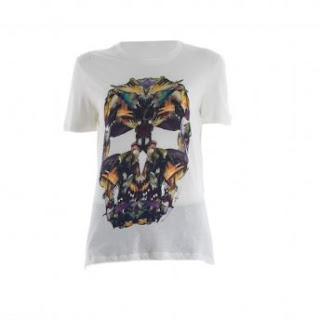 I held it longingly, knowing full well that it cost £230 and to buy it would cripple my finances. Putting it down was one of the hardest things I've ever had to do...at least, as far as fashion is concerned.
McQueen's trend for decadence and sumptuous textures has fit beautiful with the bright colours of the collection I fell in love with. I was reading an interview with Davina McCall in which the smug BB-promoting TV juggernaught was wearing, oh yes, that fabulous McQueen creation complete with feather collar. Jealous? I was seething. From then, before my eyes, it seemed EVERYONE was getting their hands on a little piece; there was Camille Belle in a fabulous structured dress in shades of pink and brown (see below), and Princess Beatrice in the 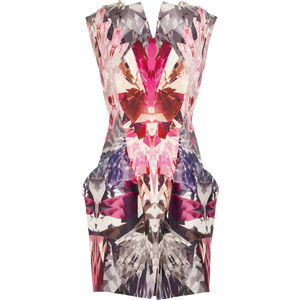 rainbow feather print I so coveted. McQueen certainly had feathers flying, so much that a recent Project Runway contestant was accused of copying McQueen for her semi-final piece; a dress consisting of a white bodice and a full white feather skirt. Yes, I could see the similarity there, but they do say imitation is the sincerest form of flattery.
So, how to flatter McQueen? Thankfully, another hot pick of mine for summer fashion is the stylings of Natasha Khan, aka Bat for Lashes (see below), the hot singer-songwriter who wears feathered headdresses to her gigs and cham 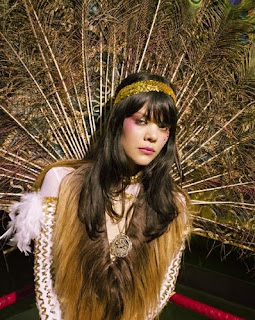 pions brightly-coloured eyeshadow. I have built up quite a collection of feathered hair accessories, tricky considering I have so little hair, including a fabulous imitation Indian headdress attached to a hairband. Oh Topshop, we love you. I also have a fab little feathered clutch that I foolishely bought in beige when it also comes in a bright blue, from asos.com. But more on feathered accessories later...
The fashion website du jour also brought out a short printed summer dress last year that had a pattern very similar to McQueen's. Unfortunately, due to it fronting their summer ad campaigns, I couldn't get hold of it for love or money. 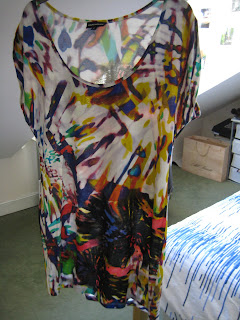 But this season I was well prepared and in on the action earlier, and found them selling a lovely little 'shattered glass vest' that is as close to McQueen as I'll get; a longline white vest patterned with 'shattered glass' rectangles in colours similar to McQueen's distinctive t-shirt, but for a measly portion of the price. But I've managed to find the perfect little McQueen fix from none other than Warehouse - a longline t-shirt with a multi-coloured pattern that up close is clearly flowers, but from a distance could easily be mistaken for that fabulous print I so covet. and at only £35 it's a far more wallet-friendly option.And thanks to Grazia I found another fab little McQueen imitation from hot new brand Liquorish, a fitted peplum skirt for under £50.
Now, for a feather collar.....
UPDATED - Hyperventilate McQueen fans, Asos have replicated that famous t-shirt for under £20. Race you!