It's not often that a designer makes me go 'wow', let alone a new designer just starting out.
And then this guy came along. 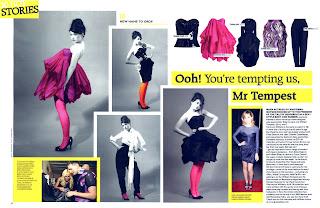 The 23-year-old designer (his birthday is only a few days from mine, in fact - all the best people are born in December) has quickly become the toast of the town. His resume reads like a crip-sheet for making it as a young designer, with a first class degree from the London College of Fashion, where his collection being chosen to head Graduate Fashion Week, along with regular stints at Giles De 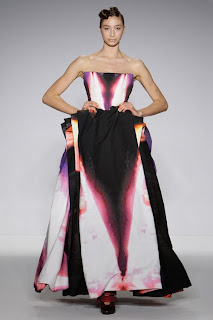 acon and being likened to McQueen (see left - I wonder why?) and Roland Mouret by a reviewer from Vogue (for more info, see his website, williamtempest.com) 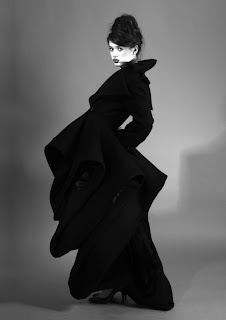 And when trendy tweenster of the moment Emma Watson wore one of his designs to a film premiere last year, he became a far bigger blip on the wider fashion radar. I first fell in love with his designs through a feature in Grazia (as featured above), which featured a picture of Emma Watson in his dress and some pieces from his first collection. The collection was a perfect representation of his name; 'tempest' seemed an accurate way to describe the fitted bodices with their elaborate, swirling and full skirts. Tempest by name, Tempest by fashion nature and yes, this young man will soon t 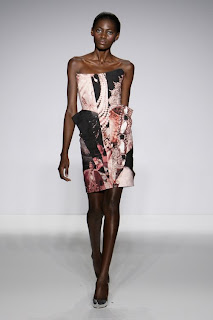 ake the fashion world by storm.

So why do I love the collection so much? I feel in love with the romantic drapery and Bronte-gothic drama of the early collections, as perfectly demonstrated by the black coat (above). It flatters every shape and adds drama to every wardrobe while being simple and wet-cut enough to remain classic. I'm saving up for one of those beautiful big-skirted corset dresses, but until then I'll stick to All Saints for similar, more affordable replications of the same flattering shape.

But who doesn't love a designer whose most recent collection was inspired by the Henrician age as written about by Philippa Gregory. (see above - is that a famous, many-wived face I spot among all those cuts of fabric?) Who knew that fashion would help with my history exams? Sort of. William Tempest is putting the fun back into high fashion, and I can't wait to see what he comes up with next.