Ooh La La La, We Love Designer....but can we afford to?

In recent days I have been spending rather too much time with dear old Harvey. Unfortunately, I'm not referring to that delightful old chap Dustin, who no doubt could entertain me for many happy minutes before moving on to the next drooling fan quoting Rain Man at him, I could happily spend hours being entertained by this particular Harvey.
Harvey Nichols, that is.
Oh yes, it's that happy time of year. The time of the SALE! Ah that beautiful word that comes second only to 'bank error in your favour', raspberry pavlova and half-price rooms at the Langham (ah what a weekend that was). And when the big guns have a sale, it's ALWAYS worth shouting about.
Or is it? 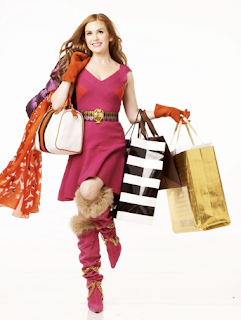 Having spent the last few weeks watching Confessions of a Shopaholic back-to-back, I have seen the lure of designer clothing played out in much the same way as it is in Sex and the City, but as we all know from watching Carrie meet her credit limit time and time again seemingly without meeting any real consequences (ok, she faces losing her house, but her friends bail her out; she apparently used to buy Vogue instead of dinner, which explains why Carrie looks so emaciated). And with the news that Patricia Field, SATC stylist and champion of all things designer, insisting she won't be a part of the second film if the 'credit crunch' the

me goes ahead and the fab four have to (OMG) downgrade a little, it would appear that the iconic show faces as tough a decision as Rebecca Bloomwood in Confessions - style or security?
But I can understand, having experienced the glorious, polished and sleek world inside the doors of Harvey Nichols, why it would be such a tough choice. Designer clothing is a combination of beauty, art, extravagance and danger. And it makes for a fabulous combustion.
I casually looked at the label for an Alexander McQueen scarf. Nearly £400. I let go. I looked at the soles of a beautiful pair of pink Christian Louboutin sandals. £300, in 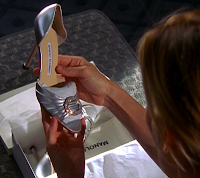 the sale. A 50% off sale, no less.
What IS this madness, many of you cry. As my boyfriend said, 'I could buy a Wii for that!' Yes, indeed you could.
But as I finally got my hands on my beautiful Marc Jacobs bag (ah I do love sales - isn't it a beaut?) I finally understand the lure of the designer clobber. Apart from the beauty and craftsmanship put into the work, when I first slung that bag over my shoulder, I felt it instantly perk up my whole image. As experienced by Becky Bloomwood, the designer item elevates your whole outfit, persona, psyche. Walking into every other shop with a HN bag on my shoulder made me stand just a little bit taller, not just because 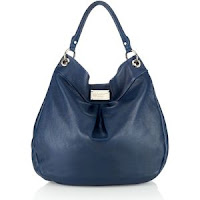 of what it meant to me to finally be able to get my hands on a label like that, but for what it means to other people (oh yes, we really ARE all that shallow somewhere along the line).
And as every good fashionista knows, it's the fusion of the Primark with the Prada that makes the outfit work; that says 'I have money but I know what's worth spending on', or 'I know what's classic and I can keep it real too'.
Let's hope, like Becky's green scarf, it will be an investment.
Just one teeny, tiny investment. That's what money's all about isn't it?
Let's hope, just like Becky's Gucci bag, mine will be worth every penny.