I did warn you, blog fans, when I started this little venture that I would introduce you to the weird, wonderful and downright wacky when I allowed you access into my stylish life. And now I'm back with a controversial new style icon, and my reasons why I think she's awesome. 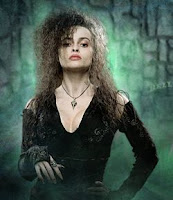 But if you ask me, goth is back and it's bigger, better and more glamourous than ever. Oh yes, this 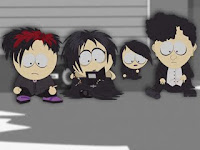 is going to almightily piss off any goth kids lurking in the corners of playgrounds a la the Goth Kids in South Park, who would no doubt be all upset that we were 'like, biting their style', but it's only now that the fash pack has caught up, understood why what these goths wear is so fab.

Topshop has come up with a trend named 'Horror Girl', which will have all fans of Twilight frothing at the mouth and falling over themselves to buy the 'Kiss of the Vampire' t-shirt. I'm coveting a knitted jumper with 'Damned' written on it.

But the Topshop window display has become a playground for the cobweb-wearing black make-up mafia. And everywhere is catching on. Dramatic black eyes and red lipstick on the catwalk, and a very fetching purple pallate at Dior. Dark nails are back now that summer is officially over (according to the fashion houses) Opaque tights will be flying off the shelves soon.

The fake-tanned fashionistas will be weeping over their Heidi Klum flipflops as they have to surrender to the season of doom and gloom, but all those of us who hate flashing our vampyrically pale flesh will be rejoicing in the most forgiving colour of them all.

The one thing that the goths have undeniably got right is the versatility of black. The recent celebration of the definitive chic black, Coco Avant Chanel, only goes to show how this wonderful shade has been adored for years. Once thought macabre as the colour of mourning, I love it as it's the shade that lets the rest of your ensemble, be it your haircut, make-up or a killer necklace and/or shoes do the talking. Just ask Rihanna and that ridiculous ensemble she wore to the Met Ball.

But why, then, am I labouring on about the coolness of Bellatrix Lestrange over the quiet sophistication of Coco Chanel? Now that I am, soon to become, a working girl, I should far more wisely head for the black suit aisle as opposed to the black brocade coat or black net skirt. But fashion in autumn and winter is all about channelling romanticism and dark glamour as the nights get longer. And, of course, in apprehension of all the goth-chic telly totty heading our way, such as Wuthering Heights in the autumn, and Tim Burton's Alice in Wonderland, due for release next year. Can't. Wait. Practising my backcombed hair already, and saving up for some beautiful goth-chic jewellery.