I was pounding the treadmill today in my ritual daily workout and taking in some quality dance tunes on VH1, when my fashion brain detangled itself from the single-minded 'feel the burn' focus and clocked what Rihanna was wearing in the video for 'Run This Town'.

Maybe it's a new defence 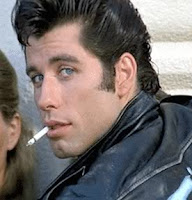 you're wearing those) but whatever the pratical reason behind Rihanna's choice of eyewear, she's bang on trend yet again. Sandy had it right, studs are back, and they're all over EVERYTHING. Whether it's the studded leather biker jacket seen on Pixie Geldof and still on my lust-list at asos.com, or the studs'n'claw jewelry at Dominic Jones (more on him later), the harder, rock edge of grunge is putting the hardwear back onto the high street. I spotted a fab studded bag by Alexander Wang, only to notice a) the price tag and b) the fact it's sold out before it went on sale, thanks to It-girl MK Olsen trotting it around town. And then there's THOSE Prada shoes and the statement bag to match....even Primark is putting studs on everything, producing a black 3/4 sleeved shift dress with gold stud detail around the neck, a dead-ringer for a dress worn by Serena Van Der Woodsen in the episode of Gossip Girl that I'm currently watching....
But never mind just keeping the studs to the bags, by far the coolest way to wear your studs A/W '09 is on your feet. There's a spread in last m

onth's Elle and Glamour dedicated to the hot studs around (accesories, I mean, not beautiful autumn totty) and the real eye-catchers of the feature are a pair of black flats by Christian Louboutin (think the chicest grandad slippers that you've ever seen) covered in gold studs and some incredible Givenchy turquoise heels covered in silver studs. They'd be like having a fabulous pair of lizards take up residence on your feet. Ok, maybe I'll leave that one.
But seriously, a little bit of a stud with every outfit is just the ticket for winter. Whether it's a simple leather cuff, a studded bag (look no further than River Island) or the full-on studded boots-and-jacket ensemble as seen on Pixie Lott in her Boys and Girls video, add a little stud to your outfit, pronto. As well as a hot man, of course.