When pastels are acceptable - how to dress like an Austrian Princess

I admit I've been a bit, well, Gothic of late in my response to colours (and when I say Gothic, I mean the angry kids from South Park) but it took a couple of events today to remind me that colours can convey just as much attitude as an all-black ensemble. These events pointed me in the direction of a certain haven of colour that, nevertheless, packs plenty of attitude. They were a guest on BBC's 'Desert Island Discs' selecting a Siouxsie and the Banshees song as his first disc, and a friend of mine posting a homage to this film on her blog, threesaparty.wordpress.com.
Immediately I poured over the images of the decadence of Sophia Coppola's imagined court of

Versailles in Marie Antoinette, gazing at the cakes and the fabulous dresses and noting that only the matronly older characters and the scandalous mistresses wore anything other than whimsical pastel shades. 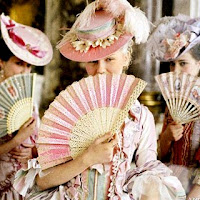 Kirsten Dunst, being a fabulously coquettish thing herself, shows us how to take these cute and girly outfit and make them cool, chic and sexy - all you need is perfectly flushed 'I've-just-been-rolling-in-the-premium-quality-sheets-with-X' make-up and that glint in your eye that Miss Dunst captures so perfectly here (left).
It is, quite simply, a masterclass in dressing to suit your attitude. 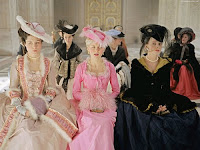 Yet Dunst's Marie Antoinette also does the 'bored yet beautiful queen' look well (below right). What she seems to have mastered is the only way to not let an outfit as fantastic as the ones she wears (oh to have been an extra in that film) is to either act as cute as it looks, yet remember how low it's cut and add the wicked glint in your eye, or to look beautifully

bored, a total contradiction to the fabulousness happening from your toes to your...erm....shoulders. She is both mistress and mannequin, allowing the clothes to mirror her nature but also allowing them to provide a complimenting contrast to the blank and flawless canvas of her face.

Of course, this is true of any outfit. Whether you like to wear as many colours as possible or to keep your colour palatte muted like me, if you are going to go as outrageous as Marie Antoinette has gone, you need to pick a side - the little-girl-in-a-candy-store joie de vivre or the Anna Wintour-like boredom with everything; your outfit, your shoes, pretty much everything. Anything in between, and the outfit is wearing you.

I just wanted to include this shot. It's yet more proof of how achingly cool Coppola's vision was as she had the chutzpah to put a pair of Converse in the shot, and because of how accurately she has captured the spirit of the 21st Century Converse generation - whimsical, fun-loving and just wanting to have a good time. Let them eat cake, I say. Anything to line their stomachs.