Sometimes clothes just get in the way - New Moon highlights

And finally, I get to see it. Described as one of the most culturally relevant films of the year (well, teenage girl culture) The Twilight Saga juggernaut continued with New Moon storming the box offices last week. And finally, I got my slice of the action.

And while I could bitch and moan all day about what's wrong with the film (bring back the old director - the new guy just wants to do Harry Potter, as does the horrendous composer, who did the score for Benjamin Button, enough said) I thought I'd use the magic of illegal photos from inside the cinema (I DID NOT TAKE THESE) to show you what's right with it. 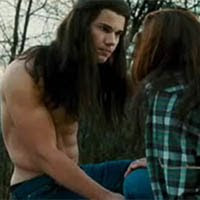 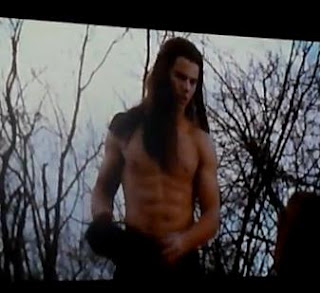 Ahhhh. Yup, that, right there, was worth the ridiculously overpriced ticket. (Again, apologies for promoting video piracy, but c'mon, that's Torso of the Year, right there.)

For more proof of why you should be Team Jacob, let's look at the evidence. 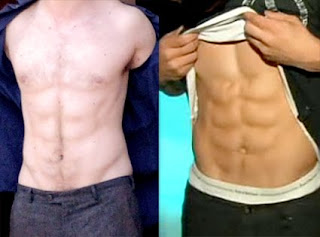 On the left we have Exhibit A - cold, pasty vampire torso (with a pathetic spattering of chest hair).

On the right we have Exhibit B - warm, smooth, tanned werewolf torso. With muscles. Rippling muscles.

Well, the jury is out, but my verdict is in. It's alllllllll 'bout Team Jacob, people.