I take it back. I was lamenting over the dull state of the fashion world at the moment, until I remembered 'tis the season for premieres a go go. Kristen Stewart has been doing her level best to rock around the clock, but a sly British soon-to-be star has snuck her way up behind her. 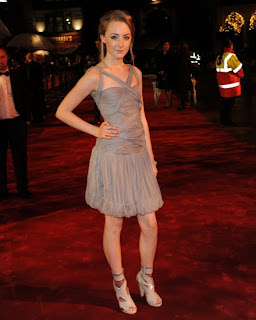 This is Saoirse Ronan, the true star of Atonement and new star of Peter Jackon's The Lovely Bones, which premiered last night at Leicester Square. And my how this girl's grown up. Vertically unrecognisable, she's come a long way from being that plain gawky kid that first freaked us out with her stalker-like obsession with James McAvoy and Keira Knightley going at it in a library.

And that dress! As witnessed on Emma Watson, it's always tough for a young actress who until a few short years ago relied solely on her mum to dress her 24/7, and especially for smart events and premieres of Oscar-winning/tipped films (not Harry Potter). But somewhere in the last few years between childish glittery eyeshadow a fashionista has emerged, whereas little Emma Watson took far longer.

And did I mention Saoirse can actually act? And has already had one Oscar nomination? Exactly. A star is re-born a fashion star.