For the first time in my blogging career (all those many months) I was genuinely interested, Carrie Bradshaw-style, in questions raised by a piece of feedback I received. Not that I don't love all feedback received (keep commenting you lovely people!) but this piece co-incided with my latest letter to Grazia; a comment on the Size Zero debate.
The article I commented on took pity on the latest model to look like she actually eats who is now being hounded by the world that pays attention to fashion for getting fat, for looking pregnant, and for generally not looking like a starving pre-pubescent. I would have HATED to be Jourdan Dunn when she confirmed she was actually pregnant. My response to the article (which I hope will be included next week) was that it's the attitude of cruel, bitchy bloggers and anonymous commetors that make this standard of beauty acceptable, not the fashion editors. If a thin model finally getting a healthy BMI does not prompt the response 'Thankyou, a healthy example for us and our daughters!' but 'OMG get to the gym you lazy fatso! Where's your sense of pride?' where on earth is the incentive for fashion editors to put in photos of larger models?
And at the same time as I was thinking this, I discovered a response to my post on Freja Beha. Feel free to read it below. 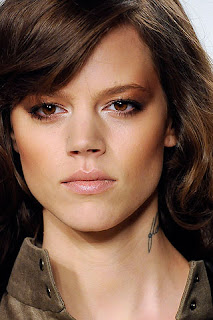 First off, I was really appreciative of the viewpoint, and my animosity towards anonymous bloggers is not aimed at this person, who responds in the way that we are meant to, or would all think we would respond to pictures of healthy models vs thin models. The writer says that they don't appreciate the choice of model as she looks so thin in her photos, and implores me as a blogger independent of the agendas of fashion editors (thus far) to make my own judgement about what beauty really entailed.
In short, I could have chosen a healthier-looking girl.
The writer was correct; I could indeed have chosen a la Mark Fast. But the simple truth is, I think Freja Beha has a beautiful face. A face that, like a waif-thin body, cannot be replicated elsewhere and is thus totally unique. I think Kate Moss has inspired the thought in us all that anyone, if they give up eating for long enough, can be as thin as Freja, but not everyone can have her face. Cosmetic surgeons really can't work those kind of miracles.
And while I'm at it, I would like to challenge all those who DO champion plus-sized models over thinner models. Are we really looking at their faces, or are we looking at the fact that they are not size zeros? The majority of tiny models have identical ironing-board bodies, but it's their uniquely beautiful faces that have put them on the map. I just hope that all those crusaders who are caught up in the 'normal women' crusade don't forget that it's not just about the BMI.
PS That letter did go into Grazia.