Happy December blog fans! I was thrilled like a small thrilled thing when I woke up to the first true frost of the season (god, it's taken ages!) and was de-icing my car with fervour.

But thus far December only brings sad news. A little bird has told me that I might have to start wearing uniform at work! The injustice, blog fans, the cruelty! Apparently Health and Safety dictates I wear a voluminous blue blouse, which, I might add, is sleeveless for added hypothermia, and plain black trousers and FLATS! FLATS!

Naturally I will be protesting against this injustice. But, thankfully, it's only a few short days until term ends and I can wear whatever I like.

One thing I will not be wearing, however..... 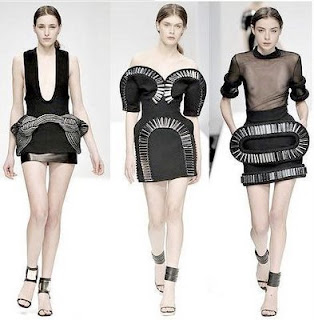 It's taken me long enough to get round to slating this designer (David Koma) and I assure you it's not just because Cheryl Cole was the one to put him on the fashion map. But look at these dresses! Just look at them! They look like the kind of D &T experiment made by some Year 9s with a glue gun, a bin bag and a lot of Slinkies. When are you supposed to wear them? The only place I can think of them being appropriate is to the fictional 'Derelicte' show in Zoolander.

Another thing I am terrified of seeing in the shop windows is the puffa jacket, which has made a comeback in recent weeks. Yes, sure, they look lovely and warm, and I don't doubt that a full-length black puffa with a fur-trimmed hood would look fab being trotted around the frozen streets of NYC by an Evangelista, a Campbell or a Bunchen. But not by you or me. We'd just look like chavs, or six-year-olds.

Although tis the weather to comfort-dress, I re-assert to myself that I will never ever wear anything sheepskin-lined (Ugg boots) no matter how cold it gets, mainly because my pediatrist would kill me.

But having seen a Hilfiger Denim purple brocade 'skater girl' skirt in this week's Grazia Top Ten, I'm looking forward to getting my American Apparel replica out. Along with dresses, thick tights, and my leg warmers. Relax, they're not neon or anything.