Finally, slowly and surely, I am creeping up to 100 posts on this blog. Considering I've been going for over six months that's pretty poor, but considering nearly a third of those posts have been in this month alone I'm optimistic for the coming year.
I am also getting close to 2000 hits, again not that impressive but I'm hoping to up circulation. If you like this blog, please keep checking, and if you really like this blog, please recommend me!
I thought I'd celebrate said milestone with another snippet of my scores from yesterday. 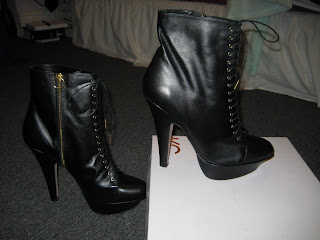 These are the boots I was telling you about. Aren't they soooooo Wicked Witch-like? And at £35 (from £160) it's hard to say no. The eyelets and laces are so dainty!
I had a very productive Sunday, which is quite unusual for me. I got in a good walk wishing I was a werewolf (though more in line with the Quiletes than with George from Being Human, his is just inconvenient, poor guy) so that I could race across the fields, or that I was Neytiri from Avatar.
I also cleared out my wardrobe so it no longer resembles a jumble sale (well, one side doesn't. Why do wardrobes get so messy so quickly? I need a walk-in) and watched one of my favourite films ever. 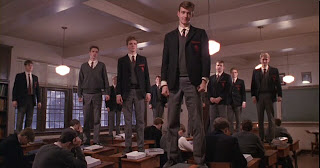 Yeah, that one. That one with the cult of weird table-standers.
In case you are one of those kids who, like I was until recently, is not yet educated in the glory, this is from Dead Poets Society, that epic coming-of-age piece of cinematic gold, featuring possibly one of the most hilarious teenagers ever to grace the screen. 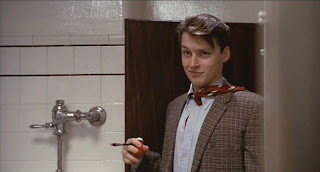 This still is from just after this character has painted a red lightning bolt on his chest to 'make me feel potent, like I can drive girls crazy'. This is the same character who, bored with the name Charlie Dalton (all the best rebellious kids are named Charles, Chuck Bass anyone?), renames himself Nuwanda. You see? Clearly he's a legend, and he's one of many contributing factors that make Dead Poets Society  one of the best films EVER (others include a boy writing a poem to a girl he loves. Writing a poem! Who would do that nowadays? And he reads it to her, in front of her whole class. Shameless, unembarassed adoration. Also the fact that the sneaky grass kid is bratty and ginger, and because I'm a bit in love with Neil. Poor Neil).