As I sat comfortably on my nice squishy sofa of an evening watching what I am now convinced is the greatest TV show ever to come out of the UK in recent years - Being Human: vampires, werewolves, ghosts, and gratuitous sex, language and actually funny humour - I was confronted with an unfortunate reality.

If you do believe in the afterlife, somewhere at the corner of your mind are those considerations about what it might be like. 'A big bed, and they just say, 'Come on in' '? A scary limbo as populated by Christopher Lee's Rasputin in Anastachia? Or that just plain freaky candy-coloured Heaven in All Dogs Go To? Whatever your image of the hereafter might be, your image of yourself in the hereafter will give you most pause for thought. 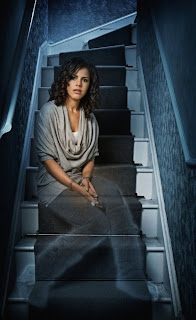 Something that, unfortunately, didn't cross Annie's mind when she was pushed down the stairs and made a rather unplanned entry into eternity. Wearing Uggs.

Now, for those of you that read this regularly or know me, my personal idea of Hell would be wearing Uggs for the rest of my life (future kidnappers...please don't read this. Damnit). But I imagine that this sort of outfit was Annie's daily attire, and she does look quite fetching. Helped considerably by the muted colour palette of greys and the on-trend snood, perfect for all those sombre moments were she sits in corners observing with that gorgeous face looking all sad.

Yes, it suits her. But Annie's deathday suit wouldn't suit all of us. 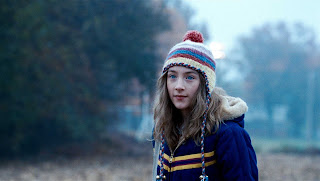 Maybe this is more to your taste?

Poor old Susie Salmon. Yes, she was raped and murdered, so that generally puts a dampener on your day, but to enter the hereafter forever confined to a fetching beanie and a raincoat is just too cruel. But again, it has and will become synonymous with her character when The Lovely Bones goes on general release at the end of the month.

Now, I imagine you are either writing me off as being totally weird and macabre, having a strange fascination with death, or genuinely having no clue about SS10 and wanting to fill the space. Part One is probably true, and Part Three is also true because, let's face it, every blogger is raving about McQueen and I doubt very much my opinions would be first choice over Bubble or Tavi. So, as it says on the tin, I'm taking inspiration from what's around me. And the supernatural seems to be in vogue right now. (I believe Robert Pattison is in Company, in fact)

So, onwards. Because that's how life has gone for Susie and Annie. They don't let a little thing like being dead stop them from making a statement. And that's what their outfits are. A final fashion statement. 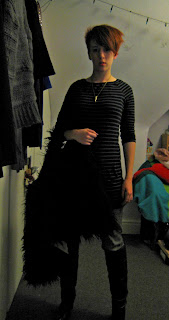 So what final impression would you leave on the world? Apart from nice underwear, like Grandma taught you?

I wouldn't be too unhappy with this, actually. Yes, it is what I was wearing today; it's too late to be really creative. And it's all very well saying you want to spend forever in SS10 McQueen shoes and Chloe shorts and poncho (totally wouldn't match, totally wouldn't care) but if I had to spend the rest of my life in an outfit, this one would do. It won't date, I wouldn't get too hot, and if it got cold my lovely woolly gilet would sort everything out. The boots are fab and, well, I'd get used to the heel (and I bet Annie doesn't walk around going 'sod it these Uggs give no ankle support!' And, of course, a little bit of bling. I've got to be just a little bit unique and cool.

I'd better not wear this outfit EVER AGAIN. That would be tempting fate. But I'll be on the hunt for a far more extravagant way to be seen forever. Foresee many All Saints dresses. And black.