Ah yes, as payday rolls around, I dream like a fool of the stuff I would buy if my name mysteriously got mixed up with 'Wintour, Anna' or 'Cruz, Penelope' (not that I'm mistaken for either ever, shame). And as terrified as I am of the departure of black from the 'cool' list come spring and summer, there is one instance where I would accept wearing sludgy green. 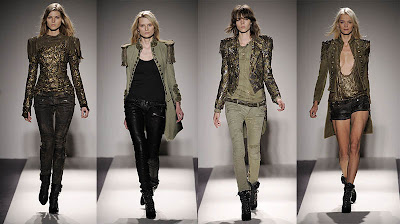 Ah Balmain. It never fails. Sure, it's sludgy green, and I was never really convinced by their demin military jackets (OMG SCANDAL), but I could easily be convinced if a delivery of their warrior-goddess-awesomeness chainmail top (far left) turned up on my doorstep.

Anyone? Balmain? I promise I would name my first baby Balmain and insert Balmain into every sentence from now until I die. Like the vampire kid in South Park, per se, Balmain?