So the whole blogosphere is mouthing off about Tanya Gold's recent Guardian article claiming that she 'hates fashion', which is like saying you hate air, food, or trees. As I commented on Tanya's article, said to Tavi, and will say to anyone who cares to listen, remember that speech Miranda Priestly makes to Andy Sachs in The Devil Wears Prada about that blue sweater? And Stanley Tucci's speech about how the 'artists' like Largerfelt and De La Renta created something 'greater than art, because you live your life in it'? Exactly.

Anywayyyyy, won't give any more attention than needed to that silly woman. A momentous occassion took place in my fashion world yesterday (while we're on the subject, Gold would probably berate me for calling anything in the world of fashion 'momentous' given what's going on in Haiti, and for being so narrow-minded as to devote a whole blog post to something so trivial, but hey, she devoted a whole article to something she apparently hates, yet will never be able to escape, mwahahaha). Truly momentous. I was quite surprised.

I wore a skirt.


Here is said ensemble. Trusty wraparound cardigan, check. Total lack of colour, check. RedHead signature pose, check. But look, I'm SMILING! Obviously well happy about wearing a skirt, and finally getting to wear a pair of shoes I've had languishing at the back of my wardrobe for a good while as it's been too cold for anything other than trousers, and those shoes totally don't work with trousers. 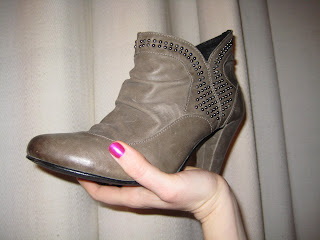 Aren't they cool? Remind me of Pradas AW09 with the little studs. And after tottering around in all my Kurts these are like flats by comparison.

This is the nail varnished I wanted to show btw. It's the best shade ever. I want a lipstick to match.

I also had fun rediscovering colour - after putting on that dream nail varnish I was looking for pink stuff and found this jumper. It's such a cute shade of pink, esp. with red lipstick.