All the fun of The Brits

In a channel-hopping session last night I did notice that the Brits were on. Now, I have been avoiding the Brits like the plague this year for a number of reasons, most of them JLS, Cheryl Cole and Florence and the Machine.  I'm waiting for the BAFTAs and Oscars to see the real cream of the fashion crop. But there were a few choice outfits in the lineup last night, so here are a few of my favourites. 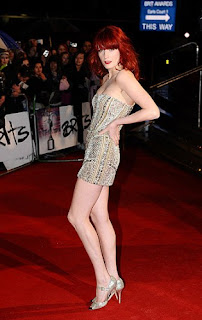 Now, I dislike Florence because she spends so much time flailing around pretending to be Kate Bush even though she's not and never will be, and because her music is a tad try-hard. But she's effing talented and she looks INCREDIBLE. So I'll let her off. I'm unsure what to make of Katie Melua, who appears to have done what Imogen Heap did at the Grammys and worn the weirdest outfit going. I like the top. I could be convinced to like the bottoms. But not together. It's a bit too Helena Bonham-Carter for me. 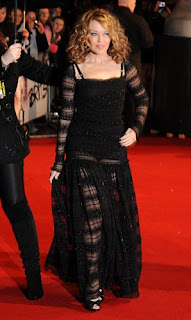 Awww our Kylie. Well, the Aussies' Kylie. A bit of flamenco chic worked in Strictly Ballroom, but I'm not sure about here. Much better D&G than Britney, though. 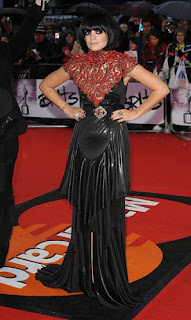 I did a double-take when I saw this piece of crazy wonder. I thought Lily's maddest choice of the night was her ginger wig, but no, this masterwork, by Chanel I gather, is nothing short of twisted genius. And I'm LOVING the dark makeup and hair. 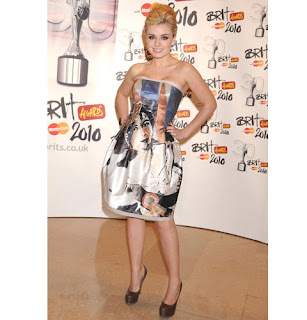 Now, I DESPISE Katherine Jenkins for her dumbing down of classical music, but this dress is amazing. Looks like a William Tempest or something Andy Warhol would have come up with. Totally not typical Katherine. I thought she was Little Boots at first. 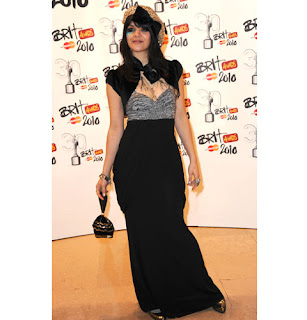 Natasha Khan, who in my opinion deserves some more recognition than she's getting (rather like Marina and the Diamonds will when she finally debuts) Partly because she's so sodding cool. Another Imogen Heap-a-like outfit, with a bit of psychedelic Mary Poppins and Victoriana thrown in. 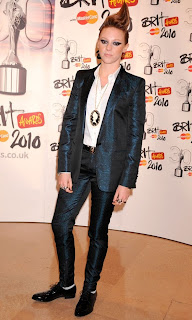 And possibly my FAVOURITE look of the night, La Roux. Sure she looks like Jedward's older, hipper sister, but the amazing suit, the flawless quiff and makeup, and the fact that, weirdly, it all makes her look more feminine, makes me love her bonkers coolness ever more. 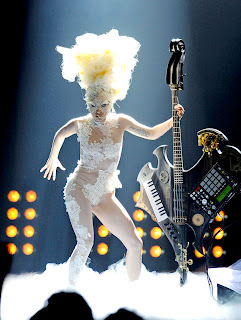 And then, of course, there's Gaga.
(I got the idea of this post partly from my friend Katie, who used to write a 'Hit or Miss' column for our student newspaper after any award ceremony.)
Aha! More fabulous Brits outfits for you! 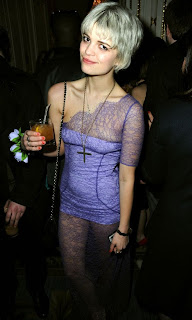 I bloody love Pixie Geldof. Only she would manage to make this look good. Though it's probably because she's got about as much fat on her as I have on my arm. Take note, Britney.

Grazia didn't like Nicola Roberts' bow extravaganza, but I think she looks amazing. It's not OTT, it's OTW (outta this world) individual, a far cry from all the dull LBDs worn by the other popstrels (Pixie Lott much? Dire) and looks amazing with her skintone. Go Nicola! You're the best of GA by far!