I'm going to be jumping between E! and Sky. So let's start off on E!...
11pm Aaaaaaaand they're off! Ryan Seacrest is doing this thang, using big words like 'historic'.....and he's wearing a nice Burberry suit.
11.01pm There's a lovely montage of former winners with the Avatar soundtrack in the background, nice touch. Sounds of screaming fans, wonder if that was pre-recorded at the New Moon premiere.
11.05pm Ah, Mr Sam Worthington/Jake Sully! Sporting his trendy Avatar stubble and a cute little girlfriend with slightly clashing hair and tan in a lovely Ariel-esque fishtail blue dress. (Updated - ah, it's not actually blue, it's metallic.)
11.06pm Here's Zac Efron with a slightly odd Elvis/Jedward hair hybrid. Apparently he's seen Avatar 4 times and thinks Sam Worthington is 'the man'. Bless.
11.10pm Jay Manuel is sporting his trademark freaky grin. And he's in Tom Ford. Guess he's backing Colin Firth.
11.11pm Anna Kendrick is in a beautiful 'blush-tone' (thanks Jay) dress that makes her reminiscent of Michelle Trachtenberg and Kristen Stewart - pale and interesting. Apparently it was a last-minute decision and I'm glad she went with it. It's very Grecian with lots of draped and wrapped layers, and off the shoulder to show off her earrings. 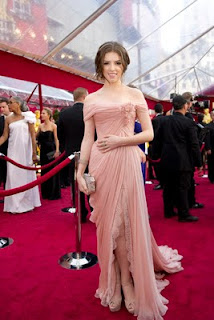 God this reminds me of Shrek 2.
11.12pm Ah, Mo'Nique is here, in a bright royal blue sleeveless gown (by Sojitz) with a wrapped fabric effect very like Anna's, with a cute little flower arrangement in her hair. Apparently Gabourey Sidibe loves to wear flowers in her hair, looks like her thunder has been stolen! She's wearing Chopard diamonds, and Vogue did a feature on Chopard's amazing ability to pick the Oscar winners by dressing them in diamonds. 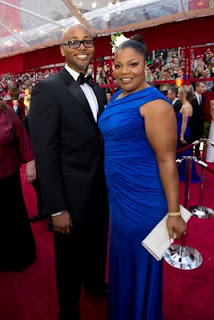 11.14pm Whoa look at Zoe Saldana! She's dragging half the bioluminescent foliage of Pandora behind her on her train! She seems to have a fondness for floor-length, and today's is no exception, but with a cunning slit up the front to allow for ease of movement. Pratical and stylish! It's a lovely shade of lilac with the train slowly progressing into purple.
Oh look, it's raining! How unfortunate. Luckily the Brits will be used to it.
11.17pm Ah, here's Mariah Carey and her little toy-boy husband. I forgot that she was in a film! She's doing a Megan Fox with a thigh-high slit in her navy off-the-shoulder gown showing a very toned leg. It's Valentino (thanks Angela Griffin for actually asking who designed the things.)
11.20pm Amanda Seiyfried has learned after her little bow disaster last year and has gone all Gaga with a stiff white bodice with a prominent bustier. I like. 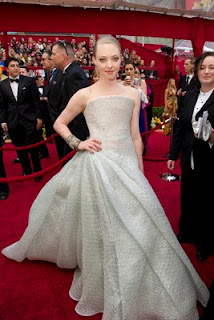 11.25pm Ah here is Zoe. Close up, the dress has a glittering gold bodice. Wow she's tall in real life, either that or she's wearing big heels. And the train of her dress looks rather like it's been finished with hydrangeas. 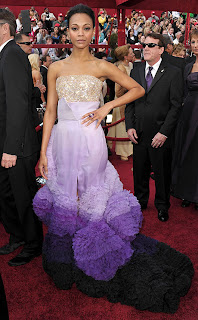 11.30pm And the Madden/Richie union rolls up. Nicole's hair is scraped back into such a tight knot her hair looks fit to break. She's wearing a gorgeous beaded gunmetal gown, with long sleeves, a boat neck and a long skirt. I like.
11.32pm And there is James Cameron! Awwww he's not dressed as a Na'vi! Not cool. But he does have a handkerchief in his pocket that is 'Na'vi blue'. 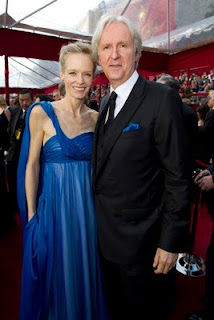 11.33pm Here's Vera Farmiga, who is wearing a gorgeous cranberry gown with a heck of a lot of applique ruffles. Like how her lipstick matches but not quite matches her gown. It's by Marchesa. And it's got a pencil skirt. Good luck climbing stairs. 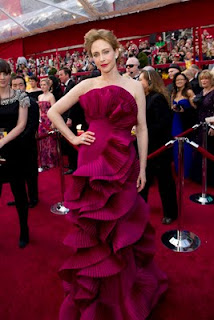 11.35pm I've switched quickly to Sky for fewer perfect creepy smiles. Angela Griffin (who I remember from Cutting It, is grilling Zac Efron.
11.36pm The woman standing behind Zac, who judging by her mic is an usher of some kind, is chewing gum. Classy.
11.38pm Over on E!, Tina Fey has arrived with her bangs slicked and pinned back and a gorgeous gunmetal sequinned gown. 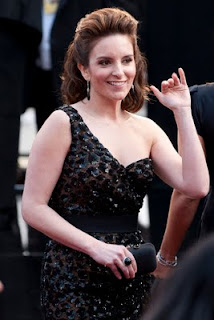 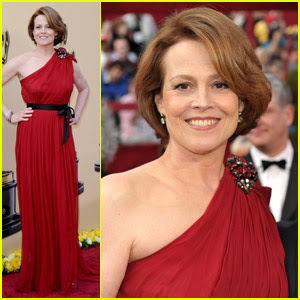 11.40pm Maggie Gyllenhaal is wearing a tie-dye dress that will leave very little breathing room, along with a gathered seam effect running all the way down the dress. It's Dries Van Noten. Her husband, Peter Saasgaard of An Education, has a shaved head. Quite weird. 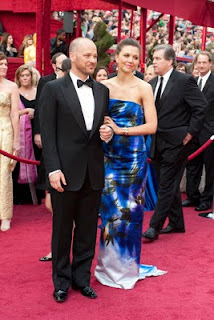 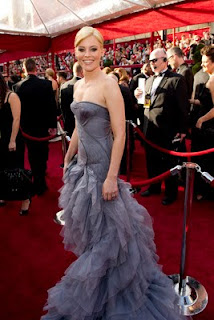 11.45pm Tom Ford, of course, is wearing an impeccably cut suit with a white carnation buttonhole. He compliments Angela Griffin, saying he could tell she was British because she was so stylish. Good old Tom.
11.48pm Mo'Nique is doing a little self-promotion.  Well, if you can't do it in front of 80 million viewers when can you do it?
11.50pm Sigourney is currently winning 'The Mrs Robinson' for Best Dressed Older Woman (pah, older, what a sad age we live int) but Helen hasn't arrived yet.
11.53pm Zoe Kravitz is staning behind Angela Griffin looking very bored, but wearing a gorgeous red velvet bodice and white skirt. 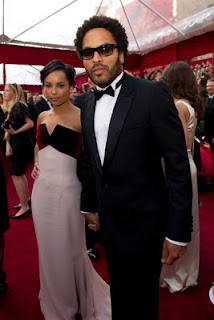 Sandra Bullock is wearing a rather risque yet elegant beaded lace white dress with slick Kruger-esque hair and red lipstick.
11.58pm AND IT'S OUR CAREY! Looking like someone poured a tub of black Liquorice Allsorts down her simple black bodice dress, that's a lot of detailing. But she's left the bling at home and gone for a clean face largely free of makeup. Not the best, but very cute.
12am Diane Kruger opts for classic black and white, with a white dress with black frills/fur effect around the collar and waist, and at about knee-length where the fabric switches from frills to a long draping floor-length skirt. 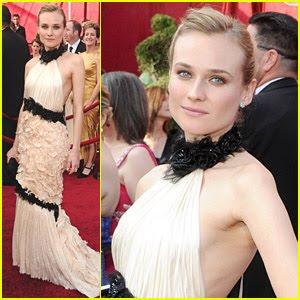 12.02am Sandra has got to Ryan; on closer inspection her dress, like everyone else's tonight, is different top and bottom. The top is beaded lace, the bottom is a slim-fit silver skirt. Not quite as 'out there' as Halle's Ellie Saab. 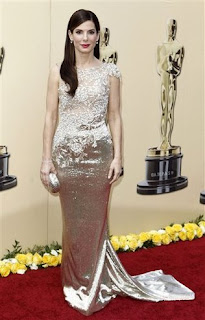 12.03am CAREY IS TALKING TO ANGELA GRIFFIN. She really is the cutest thing. Oh, she's wearing MASSIVE dangly earrings and her hair is totally Rosemary's Baby. 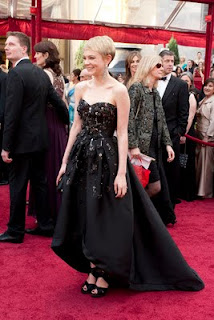 12.07am I am SO on the pulse - I guessed that Amanda Seiyfried was in Armani Prive with its strong lines and metallic shade and she IS! Wooo! As is her dress doppelganger J-Lo. Seiyfried looks better though.

Where are the bloody photos? I wish I could upload pictures of all these amazing gowns, but short of taking photos of my TV there's nowt to do except wait 'til morning.

12.10am Rachel McAdams has gone back to blonde. Boo. But her dress, with a gorgeous long train and a Monet-like colour palette, is divine. It's by Ellie Saab, queen of red carpets. 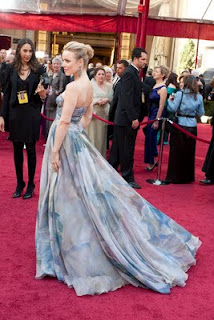 Miley Cyrus is wearing a glittering white dress with a big skirt and fitted bodice and looks like a Barbie. A Barbie with an 'underwear as outerwear' bustier bodice.

12.12am Antonio Banderas is apparently on the red carpet. All I see is a Santa beard! Why, Zorro, why?

12.15am Katherine Bigelow has arrived, wearing, as she did at the BAFTAs, a rather nondescript dress - grey, satin floor-length skirt with an applique ribbon stitching on the bodice. 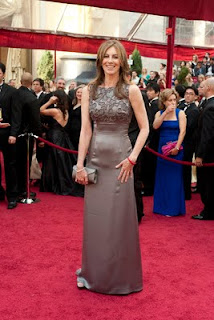 12.17am SJP is wearing a dress that defies gravity. It's couture Chanel, which I really should have guessed from the pale gold fabric and silver detailing, plus her massive bun. Ryan comments on SJP's youth and she truly looks amazing. 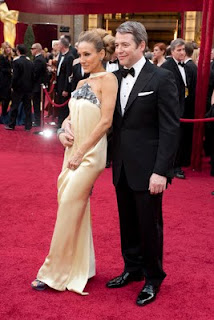 12.19am Stanley Tucci's fashion credentials from The Devil Wears Prada haven't worn off; he looks very dapper in his tux despite having no hair. Charlize Theron is wearing a lilac gown with bust detailing reminiscent of Madonna's iconic YSL cone bra. 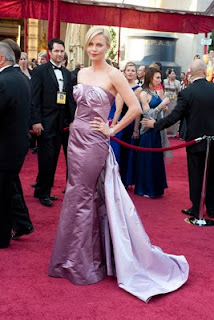 Ok, we're on a break. Like Ross and Rachel.
So far, I agree with Guliana Rancic; in general the dresses have been a bit dull - lots of long dresses with detailed bodices. So I have to applaud SJP, Maggie Gyllenhaal and Sigourney Weaver for bucking the trend.

12.26am And here's our Colin, looking impeccably British; neat but not trying too hard. The total oppositive of George Clooney, who needs a haircut and to tone down the tan. 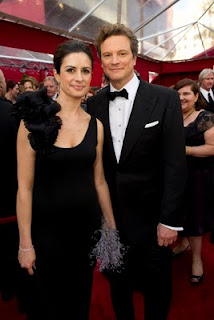 12.30am Jason Bateman looks very 'Chandler Bing' - smart yet somehow still gawky and geeky. J-Lo is wearing a dress verrrrry similar to Amanda Seiyfried's.Close up, it appears to be made of bubble wrap.

12.33am Meryl has arrived, looking statuesque in a beautiful tailored white dress which Miranda Priestly would be proud of, though might dismiss as wedding-y. 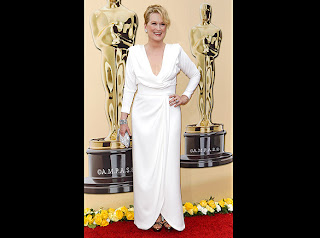 Just been informed by Angela that the Oscar Ceremony itself is only viewable for those who have paid extra for Sky Movies. Sooooooo uncool.

12.37am Jeff Bridges hasn't shaved (his head or his chin) - thank God. He looks like Zeus in a suit. 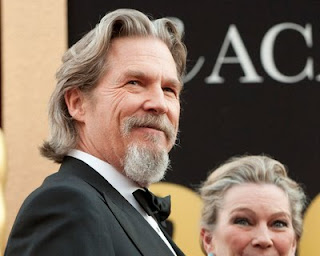 12.38am Ah it's Kristen! And she's left the dodgy short dress and the dodgy limp hair at home and opted for a messy bun and a long navy dress reminiscent of Charlotte's bridesmaid dress in the Sex and the City movie. Welcome back Glam Kristen! Taylor Lautner, sadly, is wearing clothes, and hasn't quite mastered the nonchalant pose yet. In time... 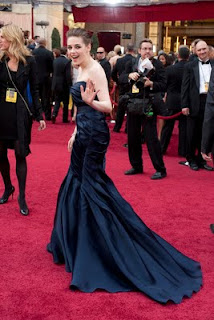 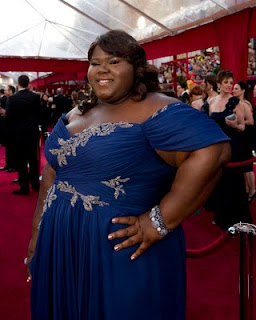 12.45am Soon I'm off to bed, and finally photos start to appear!

12.50am Oh hold on, Kate Winslet is here, wearing silver, with glossy blonde hair and white-gold jewellery. We like. She has a statue now, the pressure would normally be off, but if there is such a think as 'red carpet power dressing', she's done it. 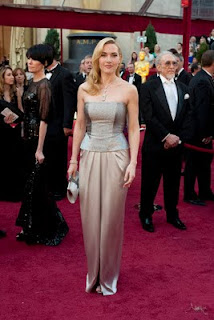 12.53am Angela Griffin has said 'amazing' more times than I've ever heard anyone say it.

12.57am And the show's over on Sky, and drawing to a close on E!. Just before I go off to bed, I get a sneaky glimpse of Helen Millen through the credits, wearing a purple dress with a beaded overlay. 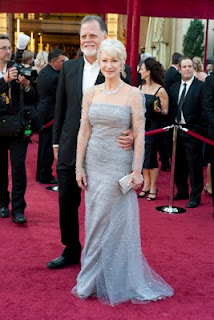 Hope y'all enjoyed the Oscars Red Carpet! Head over to I-Flicks for the lowdown on the ceremony, and check back in the...daylight for some photos of all the outfits, and me ranting and raving about the winners. Goodnight!