The Beautiful People come out to play - Met Gala 2010

Another day, another fabulously swanky event generating tonnes of pics of celebbies in their finest outfits posing self-consciously in front of the cameras. This week, it was the Costume Institute Gala, which I always had down as the poshest event out there that isn't some form of cotillion or royal wedding. So logically it calls for floor-skimming princess gowns and perfect hair.

Wake up! This is 2010. Out with the old and in with the new. Even since it was deemed acceptable (and mutely nodded at by Nuclear Wintour) to wear short skirts to formal events of this kind and even, dare I say it, trousers, the young and hot and the older and still hot, but with veiny-er legs are wearing it as short as they can.
Like Blake Lively, always a picture of modesty in Gossip Girl. Not. 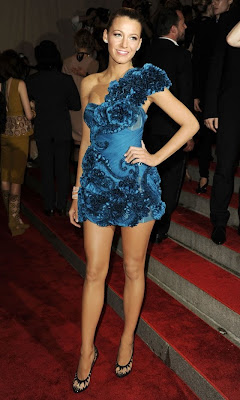 Here she is in Marchessa, looking like she tried to do that tree-diving trick Neytiri from Avatar is so good at but failed and hit every blue piece of foliage on the way down. Yet she landed on her feet, and when you've got legs that good, it seems criminal not to let them out. Keep it up Blake, while you still can.
At least Blake looks happy about her slightly wacky choice of dress. Perez is probably crawling all over this quite frankly horrendous picture of my beloved Kristen Stewart, death-staring all the photographers while wearing a LBD with net overlay. 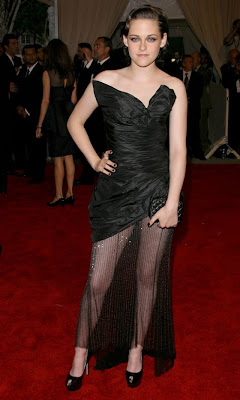 So many levels of wrong. Did Diablo Cody reject this at some point?
I imagine she definitely would have fought Elizabeth Banks for this shaggy number. 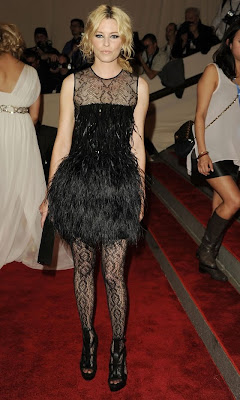 Why oh why with the matching tights and neckline?
Admittedly, sometimes tights are in order. But not in May, and not on the red carpet. And not under this adorable dress, Carey Mulligan. She's doing her cute yet deadly face as per usual, and adding black tights would be great if she was at some edgy event on this side of the pond, where we are far more accepting, but in America, they hate this sort of thing. And it does kill the dress. And it's not like you don't have good legs. 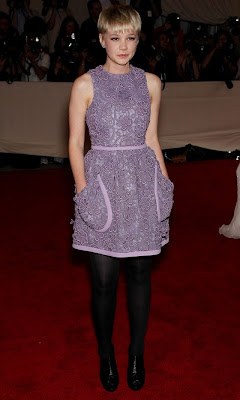 Before I move on to verbally abusing  discussing some full-length dresses, I wanted to share with you possibly my favourite ensemble of the night, worn by January Jones. 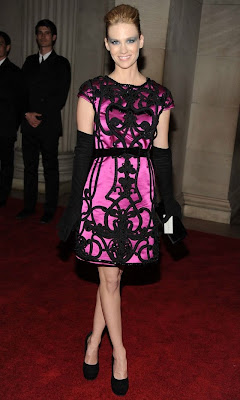 It's just so wonderful. The dress is totally gorgeous and could have been left well alone, but January decides to stick two fingers up to her prim image as Betty Draper and wear gloves last seen on the try-hard Chloe Sevingy and some eye makeup that only makes me think of Kick-Ass. Unfortunately for January, some merciless critics out there tell her nothing will stop her from looking like Betty, but it's very hard to imagine Betty in this. Hilarious, but hard.
Talking of Try-Hard Sevingy, who the same newspaper that berated January loved, she rocked up in a typically quirky outfit. It was just wrong. 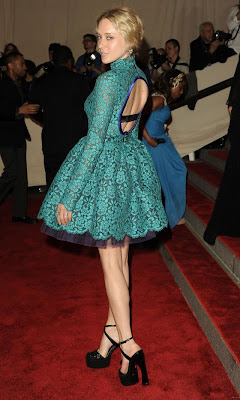 The designer clearly made this with a 'kook' like Chloe in mind, which would explain the otherwise inexplicable high neckline, backless detail (complete with bra strap on show! Nice) and just general weirdness. Oh Chloe. Thank God for you.
So, if the short dresses are anything to go by, we can expect some truly mad terrors from the floor-length camp. How about the Disney Princess line-up from Vera Farmiga and Doutzen Kroes? 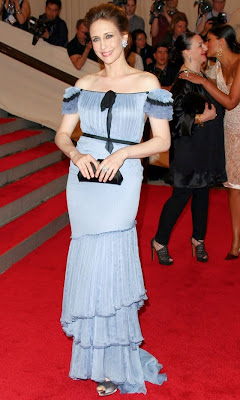 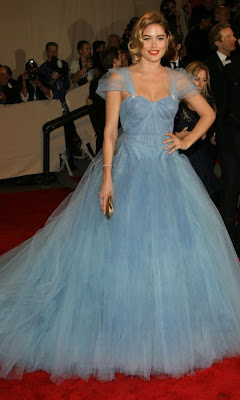 Does anyone else want Vera to burst into a song about lonely goatherds and Doutzen to lift her skirts to reveal one solitary glass slipper? Or to touch a waiting spindle.
Quick, after all that froth I need something to counter it. Maggie, where are you? 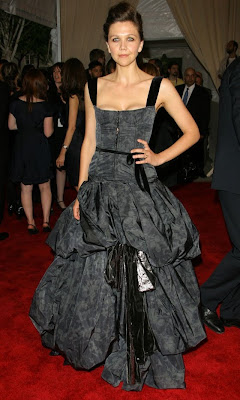 Ahhhhh. I feel better. Sure she looks like she rolled in a suspiciously demin-effect parachute, but she's so fabulous she gets away with it. I genuinely love Maggie Gyllenhaal, because she's quirky but not try-hard, has beautiful hair and a daughter called Ramona.
Actually, this dress kind of reminds me of the one that Scuttle the seagull makes for Ariel out of sails when she washes up on land as a mute human. Argh, will the Disney analogies never end? 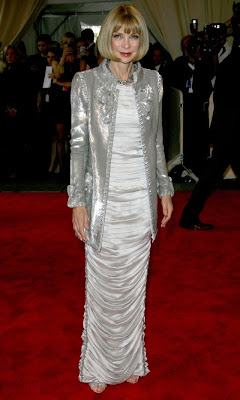 Ah, now I'm pretty sure Disney didn't do a Snow Queen film. Anna Wintour nobly steps up to the mark in this sophisticated ruched number, complete with jacket. She spends so much of her time in The September Issue jacket-less, and I doubt it's that cold on the red carpet, what with all the middle-aged photographers panting over the starlets. Free your arms, Anna! 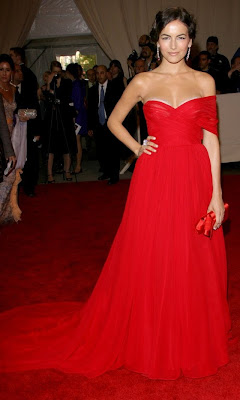 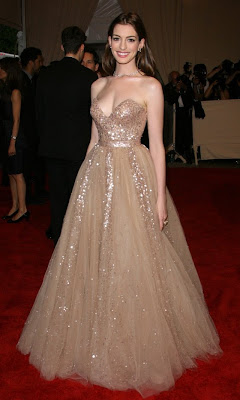 Here are two darling starlets, Camilla Belle and Anne Hathaway, whose dresses are doing a marvellous job of not freeing the girls' breasts. Camilla's bra appears to be making an apperance, but the look in her eye is daring us mere mortals to comment. So I won't. They both look stunning, so why would I? 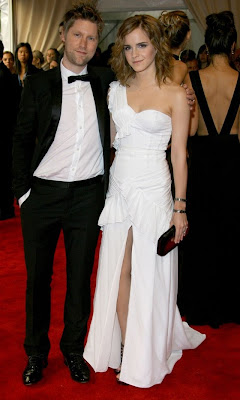 That's exactly the attitude I'm adopting here; I'm leaving my normal barbed tongue reserved for Emma Watson aside and marvelling. She may have next to no acting talents, but by golly does she look a dream. 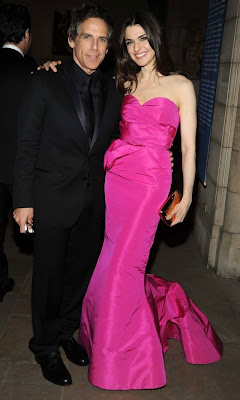 Here's another celebby posing pair, and a perfect example to counteract my above statement that a great dress points to zero acting talent; the beautiful and talented Rachel Weisz looks amazing. And Ben Stiller looks more endearing the older he gets. 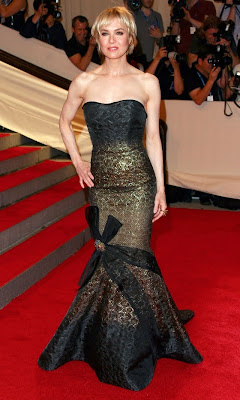 Another celebby proving age is just a number is Renee Zellweger. Sure the dress is slightly weird, and sure her arms are a bit Madonna-esque, but I just love her cute crop. 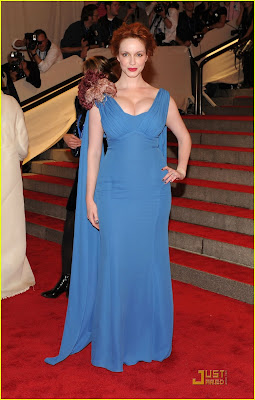 Again, a case of hot woman in slightly weird dress. A person that I know said Christina Hendricks would look far better with a bag over her head. He must be stoned in the street. But I myself cannot for the life of me understand why she does this pouty thing coupled with mad SJP eyes. Let your hair down and stick with the sultry, Christina. 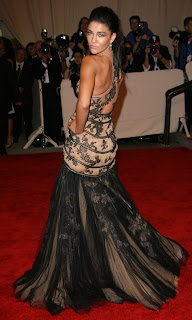 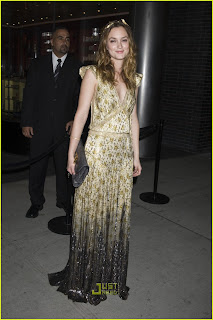 Aha, the starlets return. Unlike their co-star, Jessica Schzor and Leighton Meester opted for floor-length and modest. But they appear to have had slight personal crises. Jessica has abandoned the boho thing that her character is obsessed with (thankfully) and appears to have made a dress from netting and sofa upholstery, while usually awesomely out-of-the-box Leighton has opted for an Earth-Mother look best reserved for Lord of the Rings. Lose the dress and the boyfriend, Leighton; neither are hot enough for you. 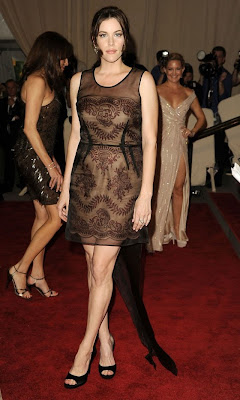 Maybe Liv Tyler would have preferred Leighton's dress; while the colour of this dress is divine, it does very little for her. PS Look at Kate Hudson gurning in the background in another awful thigh-split dress. Did she nick that off J-Lo? 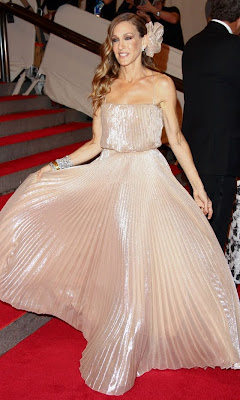 SJP appears to have stolen her dress and hairpiece too, from a mermaid by the looks of it. Love the shimmery effect, but isn't she a bit old to be wearing this kind of thing? As is anyone over the age of 10? 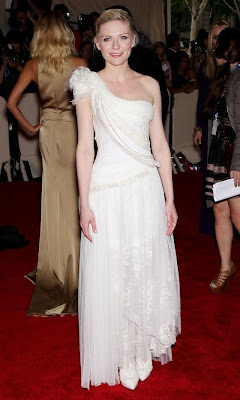 Look who's back! Kirsten Dunst, how we've missed you! She's finally come to reclaim her Queen of Kook crown from pretenders like Chloe! But she's dressed like a Southern belle bride. Oh wait, it must be a homage to the dresses from The Virgin Suicides! Yes, that's it. 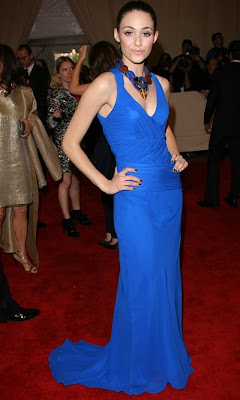 Finally,  a woman dressing her age. After years of wearing pouffy princess dresses Emmy Rossum turns it out and on. Love the shade of this dress and the statement necklace, but unsure about the pout; maybe she borrowed in from Jaime Winston for a laugh. 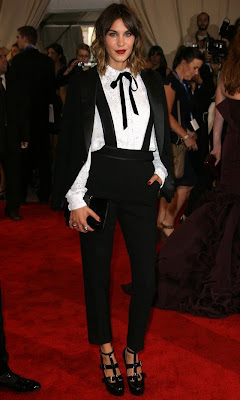 Alexa Chung, ever the innovator, appears to have borrowed Rihanna's idea from last year, albeit without the freakish shoulders and with some added, much-needed sex appeal. Reminds me of the scene in Flashdance where they go to a restaurant and the ex-girlfriend/wife turns up. Yup. Let's hope Alexa's shirt isn't just a bib, and that her idea of after-dinner entertainment doesn't involve water and a chair. 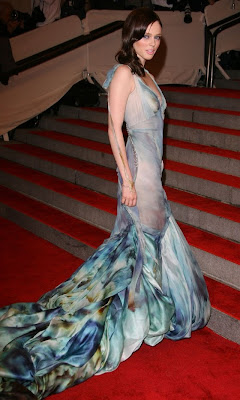 Let's also hope that nobody stands on the train of Coco Rocha's gorgeously opulent dress. Yes, it is Coco Rocha. I thought it was Dannii Minogue at first.
PS Thanks to Look Magazine and Just Jared for the photos.