(I am not) Jessie's Girl

It's that time of year for sitting around in aviators and listening to awful music. Discovered that the Glee Cast had even raped done a version of this one too. Suddenly all the rumours about the director being a slave-driver don't seem that ridiculous.
If you were wandering around outside my place of work at 9pm you would have found me dancing around, badly, and lip-synching, badly, to some Queen. Breakthrough is my current track du jour.
But it was a fab evening for sitting and listening to tunes and reflecting on sad states of affairs. Or any states of affairs. 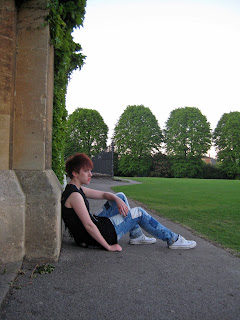 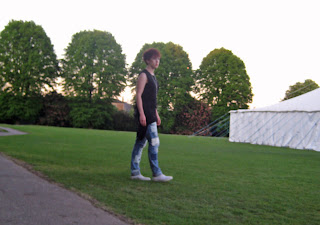 I did end up dyeing my hair, but it isn't really that obvious. It's brown, but because it's a semi-permanent dye the red underneath shows through quite well. I'm still open to radical suggestions. Maybe honey blonde? (I know.) Scandal. But I like darker, warmer hair colours as I think they make my skin look less anaemic and more pink and healthy.
Another thing you can't see very well is the back of this top. It's slashed. A lot. It's basically a string vest at the back. Fun to play with. Difficult when climbing trees and fences.
Unfortunately it's turned into another hot summer night. So I need some more calming music.
PS Can someone please explain to me the mythic formula behind having a commercially successful blog with massive media attention after about 40 posts? Found yet another one. Actually, compared to the last one I found of that ilk, this one's practically Shakespeare.
Oh PPS, the blog I've just found was Canned Fashion, and was featured in The Times in an article about recessionistas. I am well aware how much like sour grapes my last PS sounded, as Canned Fashion is actually great. I just don't understand the magic formula, and how these people get found! Quality product and loads of followers, I guess.
The one that's not so great? Rest assured, it wasn't a fashion blog. I loves them all.