The drum of drums, the song of songs

I was making a list on the train (as in a list in a notebook while sitting on a train, obviously not a list actually written on a train....shurrup) of all the random stuff I want to do over my life. And one was sing kareoke/open mic. I would love to sing Annie Lennox's 'Love Song for a Vampire', which I've posted before. She's got such a wonderfully pure yet weird voice.
So, despite telling you yesterday that I was going to wear a dress or a skirt, I decided against it. I was a bit bored of dresses. I tried on three and then went back to my current failsafe of DIY cutoff shorts. 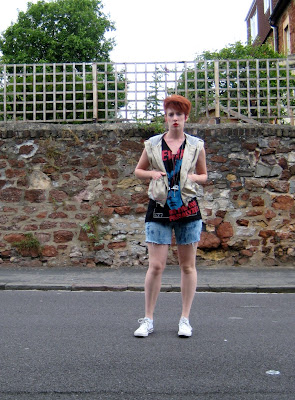 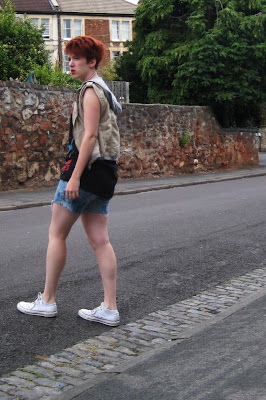 Accompanied by weird, interesting vest. I like vests that are basically t-shirts with the arms cut off to leave huge armholes. I should do that to more of my t-shirts. This one came from Urban Outfitters about a year ago and I wear it when I'm slumming around. But I felt like being a weird rebellious type today, getting my gym-toned (yeah! check it!) pale leggies out. Again. I'm enjoying the slightly warmer weather to the max. 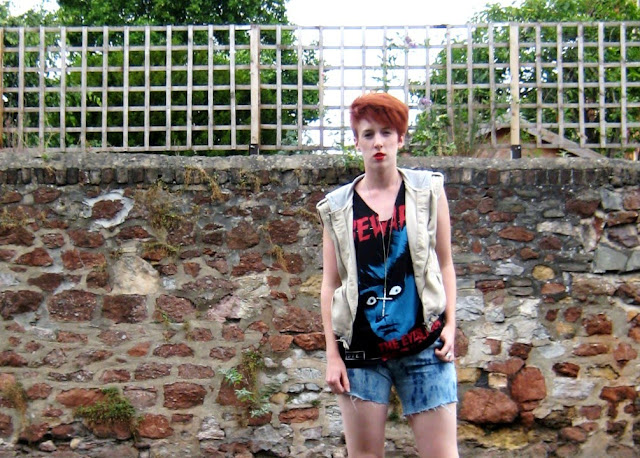 See, creepy child!
This is probably my favourite makeup look - pale face, dramatic sweep of fringe and mad yet structured hair, bit of eyeliner and mascara, blusher to define cheekbones and a red lip. I think it brings out my best features. By the end of the day it will generally have run, smeared or smudged, but I start out looking, I think, pretty good. Bah.
It's the weekend and for once I don't have many plans. Might put a heck of a lot on Ebay. Might go across to the woods and go for a run and keep an eye out for wolves (yes I saw Eclipse again). Might try to figure out what the crap I'm going to do with my life. The possibilities are endless.