A Pile of Stuff

Day Two of RedHead's super-exciting internship experience (I feel I should capitalise that and make it a label...heck I'm gonna. I've had too much gin) and I'm manning phones, calling in images and writing content, all while wrestling with a fractious internet connection and trying not to disturb the peace of a virtually silent office. It's all so exciting. And then I get home and The Devil Wears Prada is on Film4! Serendipity! 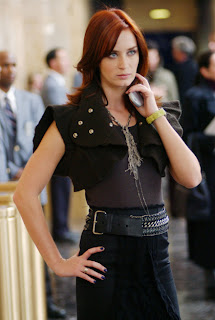 I love that film a little bit. Mainly for the fashion and for Emily Blunt (it's still her finest performance), and for Stanley Tucci doing his best bald parrot impression. But it's also good for all the interesting little thoughts it spawns.
Helped tonight, of course, by my daily round of my favourite blogs and the current comment war on Godammit. An investigation has been launched into all inane and pretentious bloggers of the world. They're a stereotypical bunch - mostly under 25, mostly under 8 stone, mostly with long hair, mostly without explanation as to how they have so many clothes.
There's so much bile on the internet. And I'm not just referring to the awful blogs. (Who am I to judge?) It's a risky thing, putting a bit of yourself out there into the big wide world. If a mean person says something mean to your face, you can walk away. But if a mean person comments on your blog, it circles the internet forever. If you leave it there, it stays. If you delete it, you're hounded as a coward. Unless you publically take to your Twitter account to abuse haters as cowards. So who's the coward?
Anyway, that argument's been circling for a good few weeks now. My main thought when I perused the posted 'awful' blogs, many of which I've checked and liked myself, is that it's very hard to put your own perspective out there and have the nasty people on the internet colour the opinions of all those who check it in the future. Such was the case with myself and Hal's blog. Despite the criticism she gets across the net, I love Hal's blog. And given the opportunity to discover a lot of the blogs I found on Godammit today by myself, I probably would have loved them too.
But now, along with Hal's, I see them with a slightly jaded eye. Are they pretentious? Are they just nice girls doing what they've seen hundreds of other nice girls do on their blogs - posing 'artfully', pouting, playing with their hair in a Lolita-like manner - and just putting their bit of the conversation (oh here we go again) out there?
But to be honest, as Andy Sachs discovers in The Devil Wears Prada ( and yes, I do use her as an example a lot), no matter how good you may think your snippet of fashion conversation is, there's always going to be someone to shoot it down. All you have to do is get a good filtering system. Be it in your head, on your blog, or by just walking off and leaving your boss in Paris.
Godammit makes me nervous.
So nervous that I have to pout nervously and pose artfully nervously. 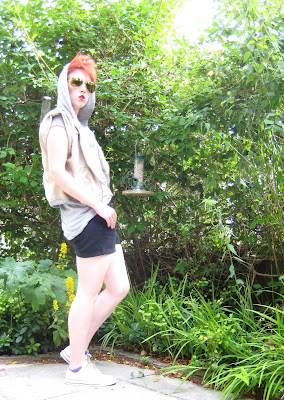 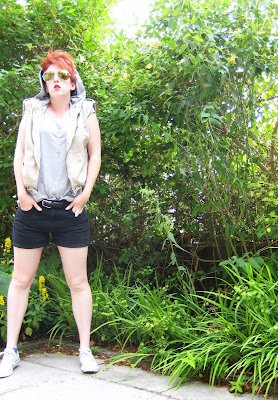 Hellz yeah. I wouldn't have fitted in at Runway. My hair isn't shiny enough. I'm too 'edgy'. Though according to my international Bible, Elle, super-long hair is back. Man, I can't catch a break.
(The one thing that does irritate me about certain many-photoed bloggers is the way they go to specific locations to take photos for their blog. A blog should be about your life, not the other way around. Unless you're getting paid.)