I was catching up with that old tv show, you may have heard of it, Mad Men, and boy, a lot has changed since the days of Series 1. Betty has morphed from bored housewife into Cruella de Ville (but I never liked her) and Don has only got more sexy and Campbell more of a weasel.
But the biggest transformation is in my favourite character, shrewd operator Peggy. Gone are the dodgy days of ill-advised sex with married men and unfortunate weight gain. Here we have a snappily dressed little firecracker, with a smart hairdo and no need to prove herself.
And here I've just completely pre-empted a piece I was planning to write about a certain article in Elle that got a few bloggers I follow so riled. The piece, written by a Mr Craig McClean, is all about how women think they are liberated in the modern day - celebrating their equal stance to men by taking pole dancing classes and wearing provocative outfits solely to feel the powerful pull of a man's gaze. The writer argues that, in fact, this has made us even less free than we were before, because, where before everything was done to be on the same level as men, now everything is done to stay there. The writer cannot fathom why we must turn our quest for equality and liberation into a quest to better men. Women and men were not created equal - they were created with differences, with weaknesses and strengths, and by beating uselessly pitted against eachother, neither wins.
Some seem angry that he was allowed to say these things, and did not accept anything that was written in the piece because they happily construed it as sexist. 'Written by a man', they said, 'ergo sexist, derogatory and highly suspect. Devalue his opinions instantly.'
Now, I'm sure they will then brush this defence of his piece off as 'victim-blaming', something so popular nowadays. That I've been naively sucked in to thinking the way men want me to think about myself. That I shouldn't bother trying to achieve what they can, because I never can. And that's right. Because there are things women can do that men can't. And one thing that we've done that men haven't is developed the massive chip on our shoulder that has prohibited us from ever achieving anything and then not going 'haha, one for the sisterhood!' I think that McClean's piece, far from being sexist, is one of the most objective pieces written about the issue, and way ahead of the curve. The way I read it, he's seen the bright future that is possible if we all stop trying to better men, and just live with it, and them. And he's right. The modern woman, all man-eating, free-living and desperate to be taken seriously, is a far more terrifying creature than the 50s figure of oppression. I'm scared enough of what my parents think of my (under)achievements without having to worry about men. And then having to worry, often more, about women. We're never going to win this one if all we do is turn on each other. But as I said, it's not about winning.
I walked home the other night, after a frank discussion with a friend in which he mentioned that acursed phrase 'battle of the sexes', past a few bars, with the usual crop of office gents having a beer. I was wearing heels and I admit, I strutted. I got a few glances, which induced a very short sharp high. But once it had died, and it always dies, you feel crushed. Power to turn heads is not gratification, and being a bra-burning feminist isn't either.
In truth, I had dressed to get that reaction. Because as much as I argue against it, it is fun to dress up and get admiring looks. To have your friends say 'wow', or a man's eye linger a little longer. But is that freedom? Of course it isn't. You always dress to get a reaction. The same friend pointed out, upon my revelation that I once ran into town in my gym kit, that I was still interested in people's reaction to my makeup-free, sweaty and track-panted state. Of course, he's right. It's impossible to leave the house without giving the tiniest bit of thought to your appearance, the first impression you will make (cue 'blue sweater' speech from The Devil Wears Prada). Even the bra-burning feminists were all about appearance.
Truth is, I don't know the answer to this one. But I do know that the only way we will ever be truly free from this totally circular argument about equality, and what that even is any more, is when we finally jump off the merry-go-round. Caring what other people think really is not the way to solve things. The only time a woman, or a man, or anyone is free, is when they are no longer concerned with freedom, or want, or equality.
But I really do care what you think, so here's my outfit for today. Nice 70s-style maxidress, perfect for a breezy day. 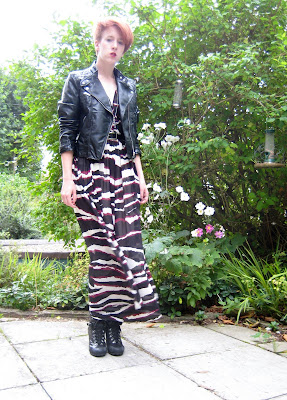 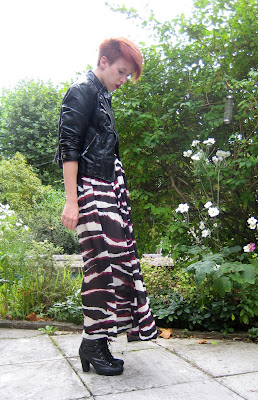