Three things I learned from The Social Network

It's Friday, and it was raining, so I treated myself to a nice little cinema trip after work. I needed a bit of inspiration and I knew just where to get it.
If you haven't seen The Social Network already, I suggest you do it before it is forced out of the cinemas by Harry Potter (though in a fight between Mark Zuckerberg and Harry Potter, I don't like Harry's chances). What better phenomenon to celebrate the internet event of a generation than the film about it? It's been all everyone's been talking about, and on, for years, and the chance to see not only where it came from, but that story told in a skillful, subtle, beautifully acted and (fingers crossed) award-winning way is a good reason to take time out from an evening spent...well, probably on Facebook.
Both times, I've been to see the film on my own. I often do best watching films that I know are going to be inspiring on my own, so I can revel in the feeling for as long as possible afterwards. (I can't be the only one who does that - sees Lord of the Rings and wants to go and do some archery, watches Twilight and wants to go for a very long, fast run through some wood) The sequence showing a rowdy college party juxtaposed with Jesse Eisenberg as Mark Zuckerberg creating a website and its subsequent viral effect is truly breathtaking, combined with a frenetic, digital score.
Watching someone so mercilessly bright yet so cripplingly dense at work made me realise several things.
Firstly, I wish I understood the internet to that level, or even just a computer. Now that I am devoid of my handy neighbourhood computer ex-pert, I will be at a total loss if I have a problem. I still couldn't tell you the components of my laptop, and my understanding of the internet and how to manipulate it is about as sophisticated as knowing what SEO stands for.
But thankfully, I might soon be getting the chance to learn. As of the week after next, I'll be taking a significant step away from the path I thought I might be heading down, and taking a new one. This week, I had two interviews, one to intern with the fashion label Jasper Garvida, and one to intern with a marketing company in Richmond. As of next week, I'll be moving on from my experience of PR to become...a community manager intern for a marketing company. Basically, I get to spend my time blogging, tweeting, Facebooking and trying to figure out how to sell a product using 140 characters.
But here's the second thing that The Social Network taught me. I can't hardly wait. Offered the choice of the two, I initially thought that the fashion internship would be more beneficial to me, carrying me along in the direction of a career in fashion media and, crucially, allowing me inside London Fashion Week as I've wanted for the past few years. But now that that is no longer an option, I get to try my hand at something new. Use skills I've developed in a new way. Draw not on my love of fashion, but on something that requires a little more engagement of my cerebellum.
Not to say that fashion is stupid. I'd be a pretty crazy person to turn round on a fashion blog and say that fashion is for the stupid. But...verbalising it is hard...I will get to go into something I know very little about, with just the skills that should allow me to do it, and learn from there. It'll be skills first, interest and knowledge second. It won't matter if I don't know what the head designer at Burberry is called (I do know, just in case you were wondering). What will matter is purely me. In the interview I really felt that, as I didn't have much knowledge of the company in the same way that I did at Jasper Garvida, I could just allow myself, what I am and what I have, to shine. And I'm hoping that once I get there, the same will continue.
Maybe I just like the idea of a bunch of likely lads huddled round a computer, marvelling over their incredible idea, a little too much. But I'm tired of feeling stupid. I want to do something that makes me feel intelligent, something that I haven't felt in a long time. I can start to feel a bit like Peggy.
Oh, and the third thing? 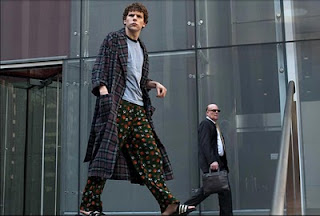 Worryingly, I so totally would. I think I just have a thing for slightly arrogant men.  (And yes, I know he's acting.)
Oh, and just in case you were worried that this was no longer any type of fashion blog... 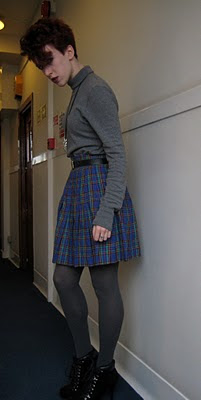 The Rizzo hair lent itself nicely to the Henry Holland-esque retro skirt, but because of the rain it had turned into Danny Zucko hair by the evening. Stupid rain. Stupid me thinking I wouldn't need an umbrella. You should always take an umbrella.
But the rain did allow for some rather cool pictures. 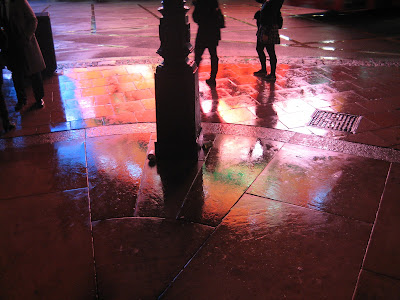 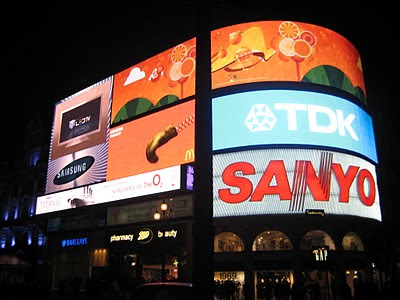 I know it's a massive, needless waste of power, but I love standing in Picadilly Circus and looking up at this at night. The centre is illuminated by it, it seems to look down on us as we rush about leading our lives. Like staring up at a stained glass window and feeling the presence of a higher power, this somehow feels like I'm staying up at something aspirational. It's not so much the feeling of my name in lights, which I've never really wanted, but the feeling that one day, I might be the one standing near the lightswitch.