So, new issue of Elle came out yesterday. The cover reminded me of a Bourjous campaign - all blacks and pinks, which a cute gamine little lady on the cover - Miss Carey Mulligan, who is akin to playing cute types obsessed with gay Paris.
But the main story of this month's Elle was their annual talent contest, hunting for a fabulous new writer. Obviously, I entered. Obviously, I didn't win. I thought I was in with a better chance since this year I wrote about something that had actually happened to me (their last two winners tell sweet stories about family memories) and it was referencing a very on-trend pair of shoes (well, from two seasons ago). But alas, twas not to be.
So instead, you guys get to read it, in all its glory!
ELLETalent Competition - 'Do you really need another pair of shoes?'


I feel like I'm sitting in front of a firing squad. I guess it sort of is a matter of life and death. The life being able to provide myself with food and coffee for a good while longer than I would otherwise, versus the death of a) my credit rating, b) my sensible diet as I resort to a can of soup a day and drink excessive amounts of water to try and suppress my appetite, and c) my soles.
So I guess by saving my money, I'm also saving my sole. Saving me having to worry about when I next get to eat, whether I can afford my rent, or whether I can pay my next phone bill. Things that most normal human beings need to do to get by.
Except, I'm a twentysomething woman with a fashion conscience. I have other needs, like all people. I need chocolate. I need a gin and tonic and some trashy tv at the end of the day. I need to have my personal space on the tube.
And I needed that last pair of Freja stiletto boots.
There they were, sitting among the other neglected, end-of-line pairs of size 7s in the Selfridges sale (this was pre-new Shoe Hall, I think I'd have to surrender my purse before entering if I went in now). Next to the Balmain military ankle boot that every fashionista worth her salt owned, was a quiet, unassuming black stiletto boot that set my heart aflutter. 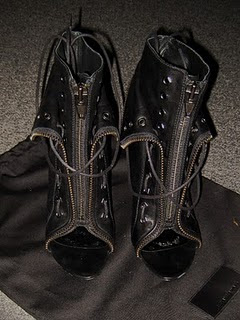 Alexander Wang was speaking to me. I was communing with a higher being, yet it was a terrible sin. I felt lust for the beautiful boot. Jealousy of all the women who would have bought them without a second thought. And greed, the overwhelming greed that a woman experiences when nothing else matters but fashion.
I had to have those shoes.
I sat down in the middle of the shoe hall, was attended to by a sweet middle-aged salesman who could tell he was on to a winner. The fashion-hungry graduate who owns one much-loved designer bag which she carries like a trophy, looking to move to the big leagues with her first pair of designer shoes, met by the eager, sweet, earnest salesman who could sense a sale and who was subtly, masterfully going for the jugular. We were two clichés, united over the ultimate cliché – the half-price shoe.
He left me alone for a while with my new solemates. I tried them on. True to my mother's training (though she would have been scandalised if she was where I was) I walked at least two laps around the shoe hall, stalking in the predatory way rich socialites and French fashion editors do, brushing my hair (what hair I have) out of my eyes and looking coyly down. In my mind's eye I was six feet tall, slim and athletic. I rubbed shoulders with Carine Roitfeld and Kate Lanphear. I had made it. I looked in the mirror and felt myself transformed. I was up there with the big players.
In the few short seconds it took me to decide, my brain busily tried to solve a puzzle that most computers would take days with.
Figures and numbers ran through my head. Bank statements. Whether I could sneak the bag past my parents. Whether I could afford a pedicure for my massively neglected feet. How many outfits would be transformed by these shoes. Whether my legs were good enough to carry off a statement shoe. If I was too fat at that angle in the mirror. Whether a (then)cafe worker with no fashion parties to go to really could justify a pair of Alexander Wang boots. It had gone from 'could I afford the shoes' to 'existential crisis' in a few slightly tottering steps.
I stood and stared at the mirror, the image of beautiful, successful fashion personality fading and leaving the image of terrified, prospect-less graduate teetering awkwardly in someone else's shoes in its place. I stared myself in the face. There, in the middle of the Selfridges shoe hall, a pair of beautiful boots stopped me in my tracks.
I sat back down in my little chair, signalling for the salesman to give me more time to think. Staring at the beautiful boots that were within my grasp, yet still so far from my reach, I wondered how much longer it would be before I could look down at a pair of beautiful, expensive shoes and not feel my stomach rush with guilt and fear. I sat there, surrounded by the rich tourists and well-heeled executives and knew I didn't belong there.
But as I sadly unlaced the boots, I wondered if, perhaps, they were the first step along the way. A little reminder to myself that this is what I wanted. I wanted to be the type of woman who could own a pair of a designer boots, and everything that came with them. The station, the fame, the career, the security, the life. They would give me the mindset to put me well on my way to where I wanted to be.
And five minutes later, as I walked out of Selfridges holding the distinctive yellow carrier with my beautiful new status symbol, oracle, incentive in it, I felt just a little bit more optimistic about my prospects. Unconsciously, I walked taller. I stood straighter. I thought I could see Kate Lanphear in the distance, and even in my comfortable flats, my new Wangs urged me to stride to keep up with my own dreams.
And the boots? I still haven't worn them out of the house. But I like to take them out, put them on and look at myself in the mirror, once in a while, to see the person I might one day become.
So there you have it.
Incidentally, I'm selling them. The dream is gone.