How do you look?

Because I get to spend a large portion of my day with one toe dipped delicately in the social media pool (this is a diplomatic way of me saying I spend way too much time on Twitter) I spotted this tweet earlier today.
"@drivingequality: Has disordered eating for women and girls become the norm, as entrenched behaviour patterns are now acceptable? "
This was particularly interesting considering I'd just tweeted a comment about whether it was weird to consider a friend saying you're looking really thin a massive compliment.
I was having a conversation with a medic friend of mine earlier in the day. She been reading this blog, and spotted a couple of the outfit posts below. Combining a comparison of these photos with ones of me about a year ago with her medical training, she quizzed me, seeming genuinely worried, about my health.
Now, in case you didn't notice, I've been banging on about the media's warped attitude to dieting for a good while now. The hypocrisy of a magazine printing an article encouraging women to drop to around 500 calories a day in the quest for the perfect bikini body while lambasting the recent skeletal girl who walked for Lanvin has put me right off them. But, it would seem, I'm not immune to their influence. For when said caring friend started expressing genuine concern over how much weight I've lost since she last saw me (nearer 2 stone in a year and a half), I couldn't help but feel a little thrilled. The last time she saw me in person, I was just finishing university, almost two years ago. I was around a UK Size 14. I was massively unhappy (for reasons aside from my weight) and genuinely despised what I saw in the mirror.
Now, a year and a half later, after dropping two dress sizes and two stone, do I feel any better?
Well, yes and no. Because where previously there was a demon on my shoulder saying 'lose weight', now there's the, arguably, far more destructive demon saying two things: 'keep it off, you can't get fat again' and 'imagine how much better you'll look if you lose a bit more'. Now, I'm not here to belittle the daily struggle that people with actual eating problems have. But, as my concerned friend rightly said, I do agree that it sounds like I'm treading the fine line. And again, whose fault is that?
We all know that beauty magazines are bad for your health, because they encourage us to hound women for putting on weight or losing too much of it while singing the praises of living on nothing but baby food or celery in the same breath. As I once said in a letter to Grazia, the public who demand the removal of Size Zero models while making snide comments about Tyra Banks putting on weight are in no position to criticise the media for doing the same, but you have to wonder who started it. The playground bullies did, but it's the playground bullies who grew up to control the press that are causing the real problems now. 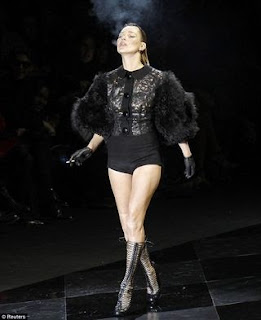 Case in point - everyone's favourite champion of self-esteem, the Daily Mail, who recently pitted Kate Moss' world-conquering physique against that of supposedly 'normal' women to prove a point. I won't give them any more space on my blog but I recommend you read the most recent post on We Mixed Our Drinks for exactly why their recent headline 'Why Do We Women Hate Our Bodies' is quite so hypocritical.
I've spoken before about how I consider my appearance as armour, but it's often a defence mechanism against what is apparent - that I am not the type that men have been programmed to find attractive, and what's worse, the type that women believe is attractive. We are the reason we hate our bodies.
And the problem is that we've lost respect for them. Instead of treasuring our bodies, we resort to punishing them when they, and we, aren't perfect. And because we've be conditioned to believe in perfection, we'll take any method, however unconventional, to maintain said perfection. Said behaviour patterns are simply a testament to how hard we have to work in this quest for perfection. A 174 calorie lunch is not an act of stupidity. It's a stepping stone to slimness. And to destruction.
And it was thanks to a conversation this evening with another friend that I came to realise exactly why we hate our bodies. So it saves us from the surprise of someone else hating it.

EDIT - But wait! It goes on! Apparently it's not the fault of an industry whose job it is to convince people they need to look a certain way, it's the fault of a social networking site! How very original!