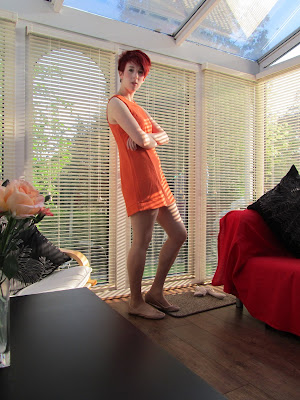 Those of you who follow me on Twitter may have noted my tweet earlier about how I wore a total of ten items of clothing today, and nine were black. 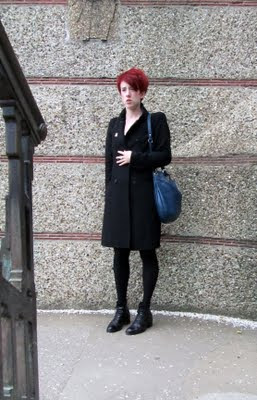 There we are see. Boring. Aside from my vampirically pale face (part being a freak, part awesomely pale new  foundation from Illamasqua) and the hair (it really needs its own Twitter profile) there's nothing to see here.
Oh...wait... 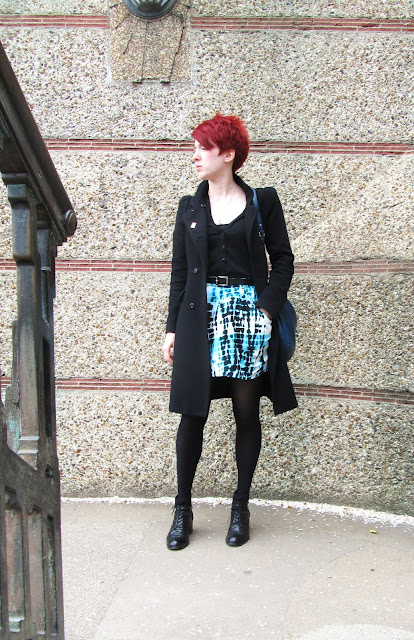 POW, motherf*cker!
Apologies, I've eaten a Hummingbird cupcake and the sugar has gone to my head, and I'm listening to the new Lady Gaga song. I'm a little mental.
But seriously, don't we love this skirt? Very last summer Proenza Schouler but on the mega-cheap. I'm looking forward to wearing it without black tights. Bring on the summer. And I never thought I'd say that.
No comments:

Every time I get ready to go out on the town, I open my wardrobe and have a long hard look at the contents, considering what angle to play. How best to dress to draw attention. What kind of attention I want to draw, and what will look infinitely less embarrassing when I am passed up for the petite buxom babes with their cascading waves of hair leaning coquettishly on the bar next to me.
I've previously talked about the way that a person's attitude to the opposite sex is defined purely based on their physical attraction to them. So I'll put it to you that every time we dress we consider our options in the exact same way. Whatever we wear, whenever or wherever we wear it, we are conveying a message. Putting on an outfit is putting on a costume, or a character.
Inevitably, this will lead on to Sucker Punch. 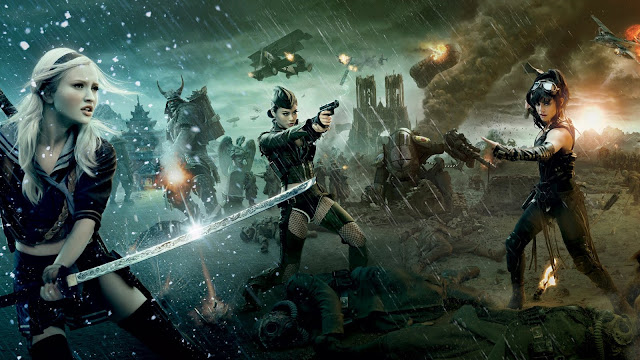 Unsurprisingly, the film has been panned, and rightly so (it's about as deep as a bath you can't drown in and about as subtle as a freight train) but the main thing that's caused upset is the treatment of the female characters. Abused women from the start, the inmates of a mental asylum forced to perform as exotic dancers and complete their daily prison chores in their underwear. Yes, you can see why this has been classified as a 12A - the fanboys were no doubt queueing in droves. My computer-game-addicted ex would love it. The lead female may have created her fantasy land, but it's quite clear someone else had her dress up like something from Dead or Alive and put all her comrades in leather corsets.
And yet...
I remember buying a corset when I was at university, urged on by a rocker-goth friend of mine. There is something strangely satisfying about compressing your organs to the point that you can barely swallow but also to the point that your waist is half the width it was before. I didn't much care for it - I thought it gave me linebackers' shoulders. But when I saw said rocker friend wearing it, it did give me a good insight into the way that clothes that had previously been designed purely for the benefit of men have, as women have advanced, allowed women to draw power from them as well. While it may be shallow, and it may cause the traditional feminists to wring their hands, the knowledge that a short skirt draws eyes to you is empowering in a base way. Feminity is a power, and there's nothing more depressing than not feeling feminine. I used to love trying to dress androgynously, but since I started having issues with my weight I've found it even more important to try and come across as overtly feminine to compensate for my body shape and my not-particularly-girly manner. While the characters in Sucker Punch have the added advantage of being overtly feminine (due to excessive parts of their femininity being on constant display) it just wouldn't have been the same if they'd been in trouser suits. It's the toughening up of their usual corsetry that makes the outfits come across as empowering (if they come across as that at all). Taking a design constructed by a man and making it tough. It'll have the fanboys drooling in the aisles, as it did the first (no doubt male) who imagined the look. But show me the woman who feels as empowered in baggy jeans and a loose sweatshirt. I don't doubt she exists, and I respect her eternally. But in the same way a man feels like a man when he puts on a suit, a woman feels like a woman when she dresses like one. I'd no doubt feel just as empowered in full body armour as I would in the outfit as modelled by Olivia Wilde in Tron Legacy, but the difference is that one is designed to celebrate. And whether that's pandering to the male ideal or not, I'd prefer to celebrate what I look like than try to disguise it, were I in the position to do so.
2 comments:

We all be hatin' 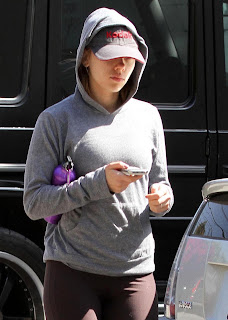 Women hate eachother. That's quite obvious. From Brooke Magnanti standing up to the feminists who seek to lay her low to Scarlett Johansson's publicist's need to deny pregnancy rumours based on an unflattering photo of the actress out running, women seem to be on a constant mission to get one over each other, and to be as good as we think the other is.
I count the calories on my lunch. I come home starving and guilt myself out of eating. I loathe what I see in the mirror.
How is this in any way constructive? How is us defending Scarlett's rounded belly, whether she has one or not, a positive influence on how we see ourselves? A writer saying that a pot belly is nothing to be ashamed of and is womanly does little to change the fact that there is such an animal as a pot-bellied pig.
Scarlett is beautiful. Brooke is a feminist. Scarlett has a pot belly. Brooke is anti-feminist. All are true. All are perspective. And with the ridiculous battle-lines we've drawn in our quest to accept ourselves, all are totally meaningless.
1 comment:

Well it looks like the good weather has broken - rained earlier today and the temperature has dropped. Silly of me to forget it's actually still only April.
Still, it was nice while it lasted. 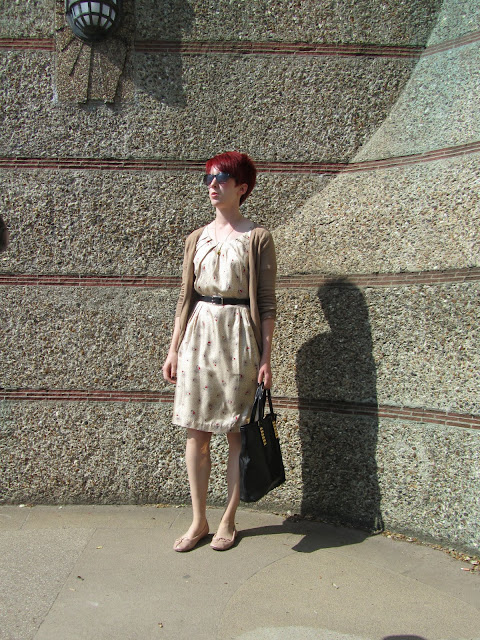 I had a client meeting today so had to dress a little smarter than usual. This is about as corporate as I get. The dress is an ancient one from Whistles - had always wanted a Whistles dress and found this one in the sale. Like most of my old clothes, it's too big now. They have another dress in their sale at the moment that I love. Hmmm... 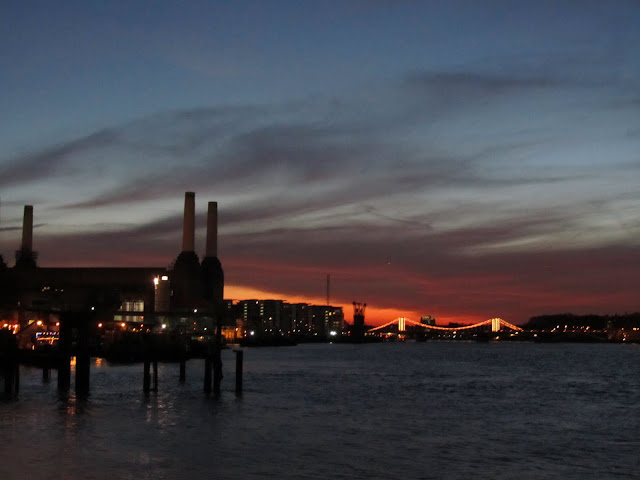 I had to go back to my old place this weekend and the less said about that the better, but I will miss the views from the South Bank. 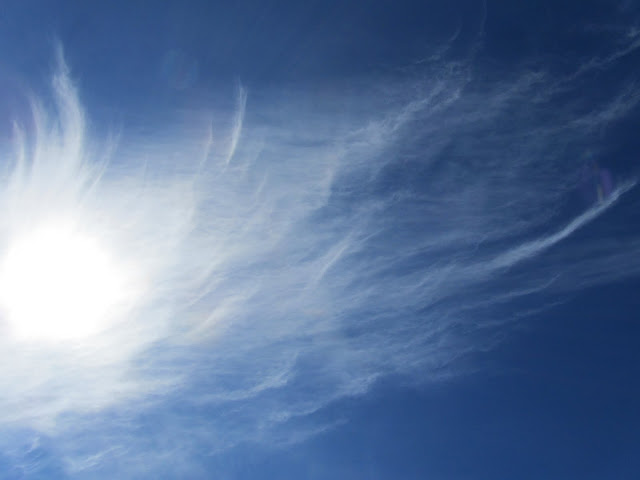 I just thought this was very pretty sky - like wisps of hair.
And to round off this pointless-image-heavy post... 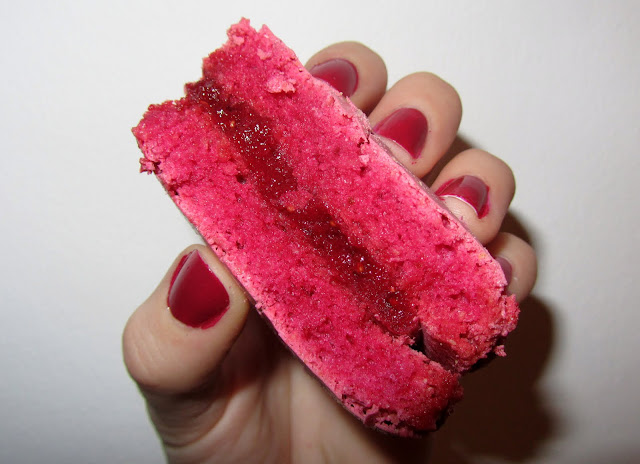 ...now I feel like a proper blogger, posting pictures of my dessert. It was very tasty though.
2 comments:

So...yeah, who turned the heating up? I think I feel spring coming on! 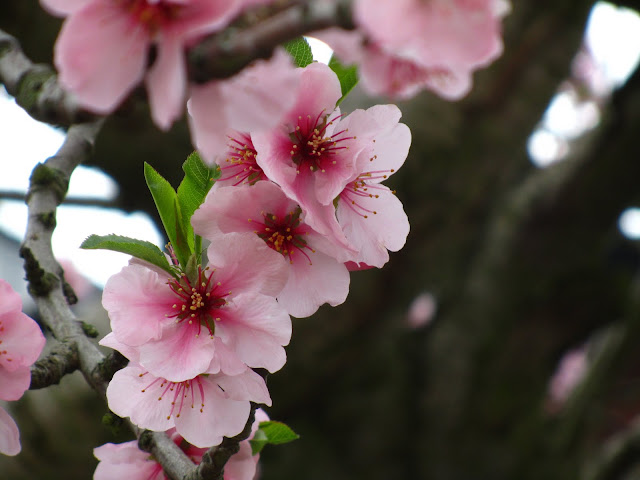 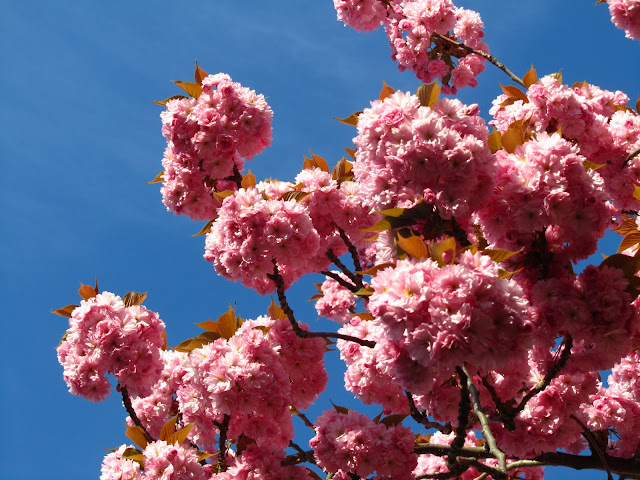 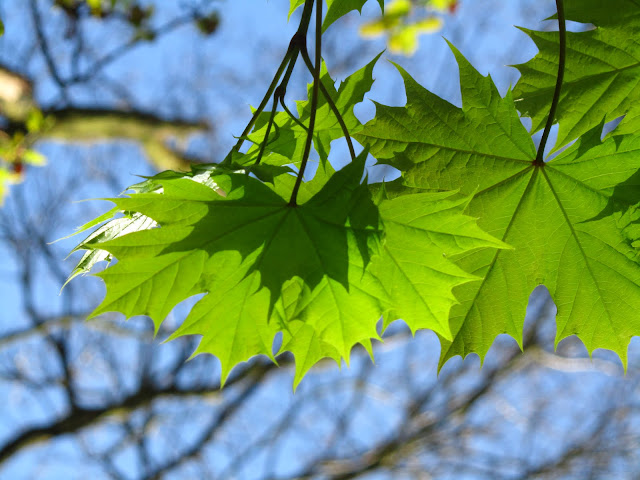 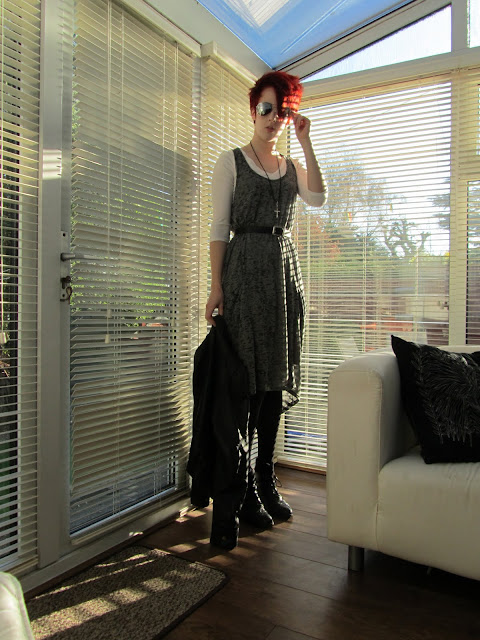 But not today. Today I try to mix brogues with biker, and fail... 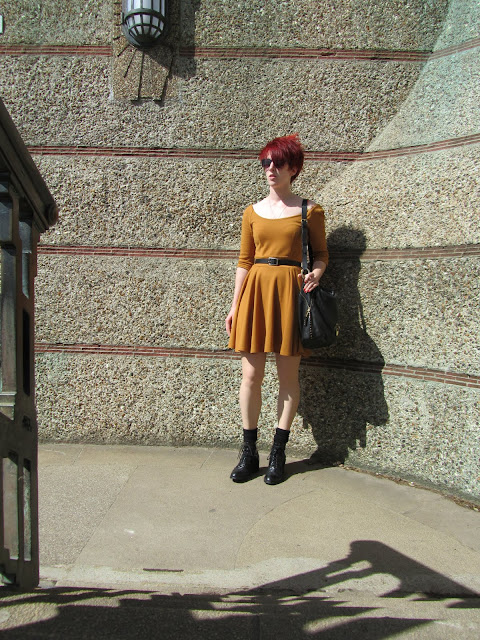 Today I enjoy the sunshine in my mustard dress... 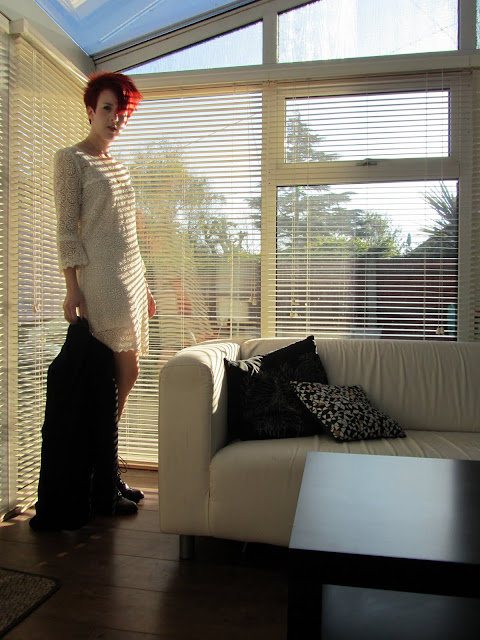 ...and today I enjoy posing for photographs in my new place. Yes, this is an en-suite conservatory. Yes, it is all mine.
Yes, this dress is entirely see-through with the light behind it.
And yes, I am wearing the same shoes in every picture. You'd think I only had the one pair.
5 comments:

I am wrestling with actually writing a constructive and interesting post, but like all great writers *ahem* I've hit a wall.
So while I get my chisel, please feast your eyes on this beautiful creation from Gucci SS11. This is basically how I wish I could dress from May to September. 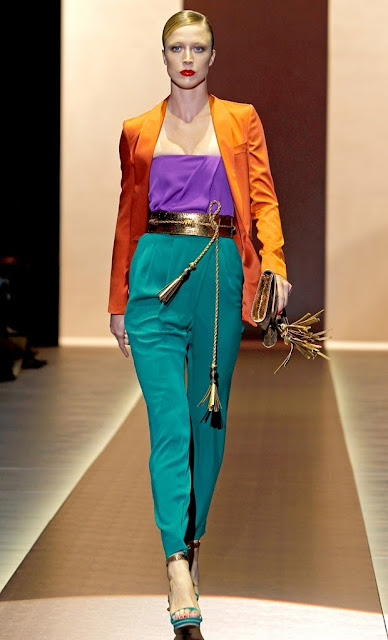 In-your-face colour. Now that would brighten up the commute.
2 comments:

Thank you very much 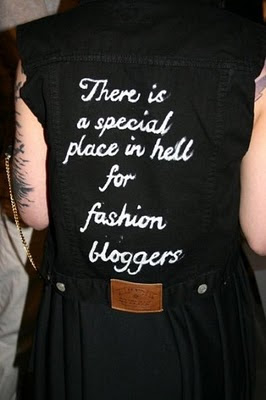 I'm technically going to hell. I love this site with a passion.
I also love the fact that I appear to have snuck over the 50,000 blog hits mark without me even noticing. So thank you all very, very much.
Oh, and incidentally, I have written something vaguely called a post recently. See it here - about The Sartorialist, of course.
1 comment:
Newer Posts Older Posts Home
Subscribe to: Posts (Atom)