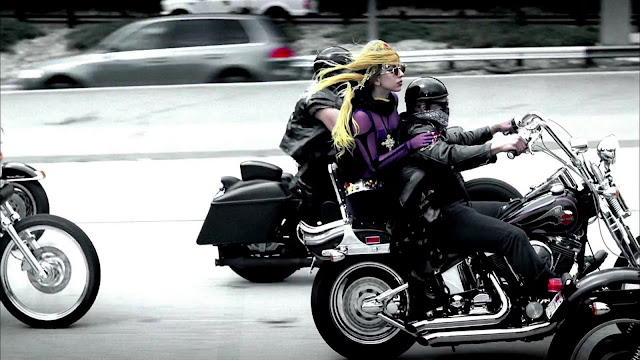 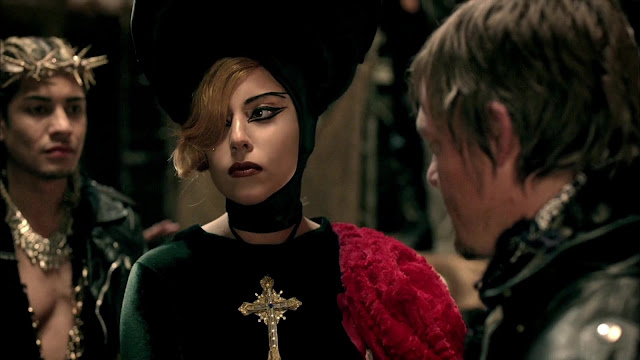 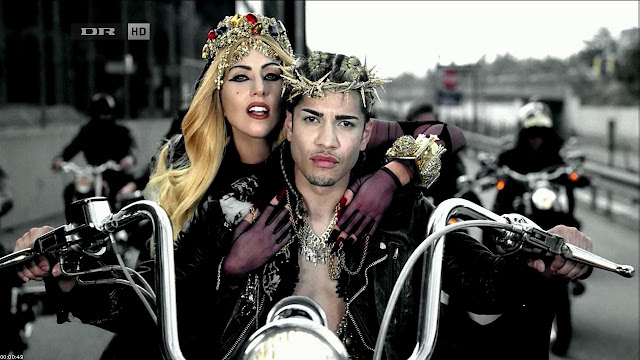 I initially wrote off Gaga's second album; as it was so different from her first, an album I loved so much, I was very disappointed. But I'm trying hard to think of an album that so bombastically shouts hope to everyone who listens to it. It's big, camp, loud, excessive, bold, feminine and raw.
And it sounds best when listening to it riding along on the back of a motorbike, leaving them all for dust.
1 comment: 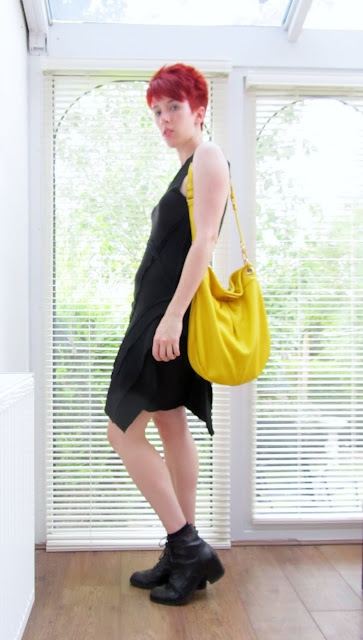 The yellow demon made its debut! The only way to crack this baby out for maximum impact is, of course, against black, and with that shocking orange crop of mine.
I had it cut even shorter last night, after a crisis of confidence in the hairdressers' where I concluded that I just looked like a girl with a boy's haircut, so demanded the razors to take it even shorter. Some girl on the street said 'lesbian' a tad too loudly as I walked past, leading me to conclude, as was reinforced by me catching a glimpse of the cover of Diva magazine and seeing the vast majority of cover models had boyishly short hair, that this stereotype will no doubt stay with me until I die. Or, as I did the last time the put-downs go too much, grow it into some vile lifeless mop of (shudder) long hair.
I'm reading Caitlin Moran's How To Be A Woman at the moment (lent to me by my gay bff, naturally) and as well as some truly laugh-out-loud (on a packed train at rush hour) lines it's got some uncomfortably honest truths about what it's like to be a woman. It's a fascinatingly honest read, and it pains me to say that some of it even feels illicit. This discomfort that women such as myself seem to have with our gender makes some of the remarks Caitlin makes seem crude, lewd and too far. But as I, like a lot of women, am incredibly uncomfortable in my own skin, I imagine that this is normal. It's allowed. It's a cross between adult confidence and what I like to think of as the crossover from youth to adulthood, where you just have to learn to live with your insecurities as something you'll eventually outgrow.
6 comments: 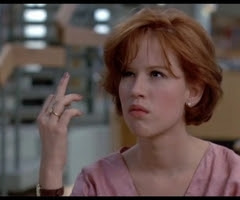 Someone once told me I look like Molly Ringwald. I take that as a massive compliment. Serious crush.
No comments:

The business of truth 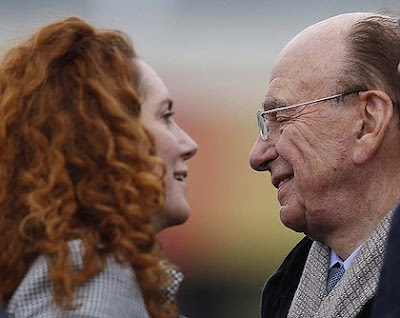 I've never been particularly aware of Rupert Murdoch. I only knew him as a savvy media mogul, and I filed him under men such as Trump, Cowell and Sugar. The kind of men I, as a slightly deluded and odd-principled young whippersnapper, might once have admired.
It's awfully hard, though, to look yourself in the eye and admit you admire someone who now has on their repertoire a fine line in piloting a corrupt, morally bankrupt and decidedly dubious media practise that finds it quite easy to calmly jettison hundreds of innocent employees to protect the turncoat backs of the bigwigs while proclaiming to the few media outlets that are listening to you that you would 'never throw anyone under a bus'.
You can visit far more esteemed and educated blogs than mine for a thorough dissection of the winding trail of Murdoch, Brooks et al's many many indescretions. You can watch Twitter for news unfolding about whether or not the rest of the rotten empire will come tumbling down off the back of yet another great relevation in this, the year that I've already dubbed the year journalism broke itself. I wonder what Andrew Marr would have to say about the importance of bloggers now, all of whom are promoting the Independent and Guardian's gleefully feverish rolling update feeds and rolling about at the jokes snuck into the final News of the World crossword.
It's a bad business, this business. And the business was to sell papers. The business is to break the big story, to sell the most papers. I gather that The Times, the paper I have read since I started reading papers and the only paper that I would buy now, is in danger too, and is also making a loss. Nobody can do it fast enough nowadays, and whether they can get there before someone else has busted the story. Inevitably, someone online.
In the quest for success, for fame and for fortune, though, this time they went too far.
Journalism has always been about seeking truth - the peoples' way of getting justice, mob rule dressed up in newsprint. Certainly true of late (see Chris Jeffries rant earlier in the year). The power these flimsy publications have over the collective population is so all-consuming that we often forget their reach, their influence. A power that is controlled, simply, by a few choice individuals who were promoted to their seats of power by their business savvy and their desire to seek truth. Sadly, two concepts that are as alien as chalk and cheese. The media is a business, like everything else, and it is not always in the interest of a staggering corporate giant to do the right thing.
Which is why, sadly, this latest incident is not the first, and will not be the last revelation about the way that we are now made aware of the world. Nothing, and nowhere, is safe from the insatiable appetite that the speed and supply of news has created in us. Public demand for the truth, by whatever means, has created a monster. A monster whose job it now is to entertain, to shock, to provide a platform for dangerous (ly stupid, often) individuals with inflammatory views to raise a pulse, and to put money in peoples' pockets.
A magazine editor I follow on Twitter gleefully tweeted 'RIP trash journalism' following the news that the News of the World was to close. As I said at the time, this is just one head of the Hydra. And every time she and her colleagues print another 'baby bump speculation' picture, they feed the monster's other heads.
No comments:

Aside from having that god damned annoying song stuck in my head all the time, I do appear to have acquired a lot of yellow things recently... 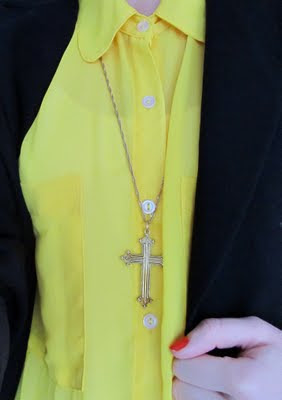 For some strange reason I decided that bright yellow was a great colour for a girl with white skin and orange hair to wear. 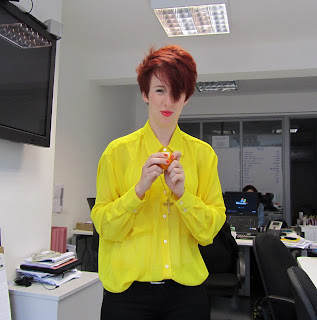 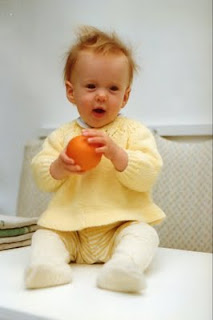 I blame my mother for putting that idea in my head.
But yes, I have concluded that yellow is a very good thing. 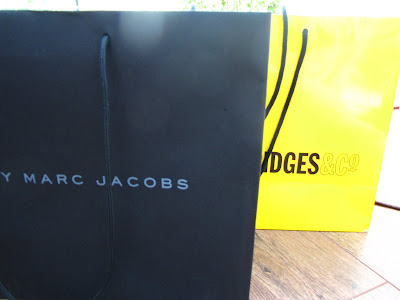 Oh yes. You know what it is.
Those who follow me on Twitter will have seen me tweet this about three months ago. Well, a certain someone may have tracked down the very last one of these bags, and presented me with it, for no reason other than that he knew I loved it. 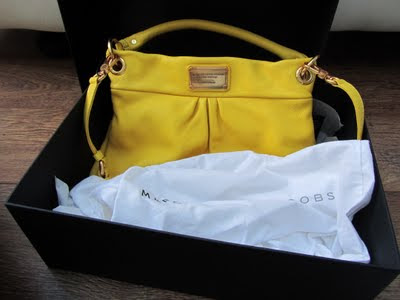 So yeah, on the day that celebrates the rise and establishment of a great democracy, not only did some gutsy US individuals demonstrate their incredible right to free speech, and to manipulating the free speech of others, by hacking Fox News' Twitter account, but also the collective reputation of the British media at large is hanging in tatters. The media whose job it was once to bust corruption in the corridors of power is now finding itself busted.
Is this the end? Never. Someone will always find new and disgusting ways to get a story, and to make money. 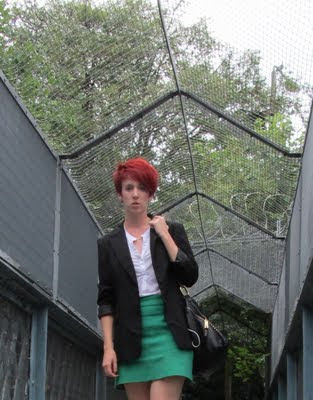 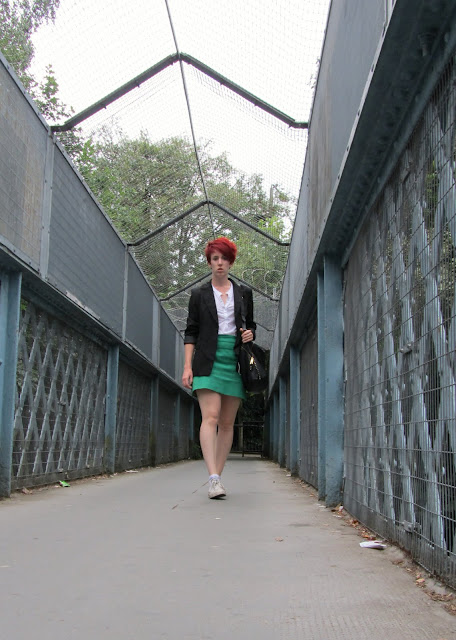 Stay independent. Stay safe. Stay aware.
Incidentally, on the same day I wore this outfit my dad turned up to an event wearing a lime green suit jacket and stone-coloured chinos. Said event, he quickly learned, was actually black tie. It's not just me that likes to mess with the mould.
4 comments:
Newer Posts Older Posts Home
Subscribe to: Posts (Atom)