A Real Human Being

I have lots of reasons to be happy at the moment. Work is slowly beginning to feel comfortable again, I've moved into a lovely new house with two good friends, and I'm finally starting to feel settled in my home. I've been in London over a year now - it's flown by, and what a huge, impactful, fantastic, terrifying year it's been.
I'm also happy that the Stella Artois 4 ads are everywhere again, and in the last flush of summer (the first weekend of October is likely to be spent at BBQs and in pub gardens, not watching leaves fall) I got the opportunity to wear my favourite dress of the summer again. 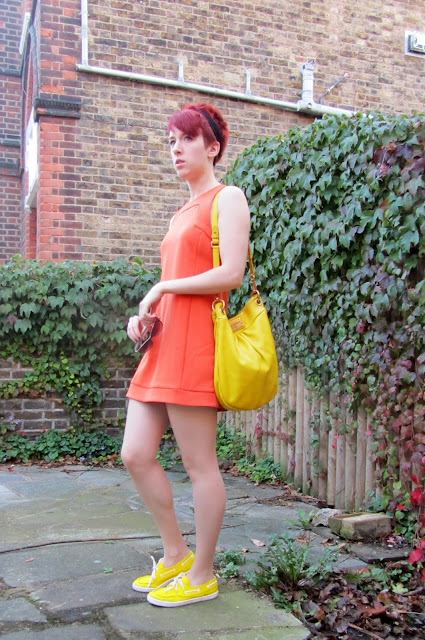 Yeah. People were putting their sunglasses back on even in the shade as I walked past.
The beauty of working in a creative office is the very varied, diverse, and generally rather good music taste. Currently I'm a little bit addicted to this (from the Drive soundtrack).
No comments: 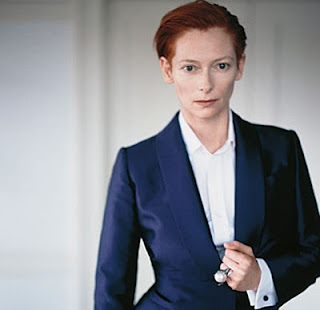 'I would rather be handsome for an hour than beautiful for a week' - Tilda Swinton
I gather that androgyny is back in for the new season, this I gather from the catwalk shots of gorgeous, leggy models looking feminine and beautiful in mens' suits, trying to introduce the mass-market to the trend. Even the most feminine, girly woman, these models say, can look beautiful while dressed like a man. I applaud their effort.
I've been becoming more adventurous with my hair and makeup of late (beauty post to follow) and have opted to create more masculine styles - slicked down, high-buttoned shirt, black skinnies and brogues. A character in Sex and the City, a photographer exhibiting a series of drag photographs of women dressed as men, maintains that gender is just a beautiful illusion.
I do not agree that gender is entirely an illusion when it comes to behaviour, traits and treatment. Whether they like it or not, regardless of how good they are at what they do, an individual is judged first and foremost on their gender, just as (as I said in a previous post) they are defined by their relationship with others, by their interractions with people of the same or opposing gender. Because we are animals, and this is what drives us.
As a result, the option to break out of the norm of how our gender is expected to appear is an incredible amount of fun. Ever since I became interested in the clothes I put on my back I'd play characters. Even on days when I'm slumming around at home I always have a character in mind when I dress, a role I want to express or play through my costume, a part of my mood or personality I want to enhance. But you can generally divide my wardrobe into two looks - masculine, or feminine.
Why do women dress like men? Is it to capture some power? To hide inside a different skin, to be taken seriously? A woman who dresses like a man has one of two options - the 'sexy' look as displayed by, say, the Estee Lauder 'Sensuous' campaign featuring a variety of (long-haired) sex kitten models in unbuttoned mens' shirts (another good example is the current Jigsaw print ad), designed to convey the sense of ownership that comes with a woman wearing her man's clothes, or the 'masculine' look as displayed by Annie. Throw Annie, Tilda Swinton and David Bowie into a pot, give it a shake and they will all come out a muddled mix of what traditional gender appearance is, messing with your perception.
Are women attracted to men who dress like women, and are men attracted to women who dress like men?
Just once, I'd love to go on a blind date all 'androgynied' up, just to test this. It's just as much fun to dress up in a very feminine dress as it is to wear a suit, and make people look once or twice at what you are. I used to be bullied for looking like 'a man' (as one tactful young gent described it). Getting around it was easy enough - dress like everyone else. But I like that now I can harness the idea, can change how I appear, chameleon-like, that I can take a lifetime of insecurity (a lifetime that will never end as long as identikit Sloaney girls exist to sneer at me) and turn it into an illusion. Part of a costume. And I'm hoping that soon more women will open their minds and embrace this costume. It's a far better fit than a corset.
No comments:

I'm moving again. Packing up my growing number of possessions (though I haven't actually bought an item of clothing in two months - go me!) into an assortment of bags, boxes and bin-liners, and reflecting on this time last year when I was packing my most treasured possessions onto a train from Bristol to London, the city of dreams. I remember cramming myself, a suitcase, a sports bag and a laptop case onto the train and standing in the corridor between carriages the whole way, staring out of the window and watching the future race closer. I can't stop humming this song.
Home is where the heart is, and where you make it. I'm lucky enough to have lived in two good homes in London for the last year, and now it's time to put down down roots in a new one, which I'm hoping will be a more permanent base. Part of the transition from being a child to being an adult is realising that the concept of 'coming home' is fluid and flexible. Some days I get on the train back to Bristol and feel like I'm coming home, and some days I get off the train at Paddington with the biggest smile on my face, knowing that I've found where I belong. The simple answer is I don't know where I belong any more, and I made the decision to feel this way when I left and started new in the city of my dreams with no roots. But look at me now - this time last year I moved to London with savings to last four months, a list of phone numbers, a few internships lined up and the dream that kept me going. And now I've got my job, got a new place with two new friends, and I've got the whole wide expanse of time and the world waiting for me, to see what else I can try and do.
Home is where the heart is, and my heart had to roam.


'In the bar where the living dead drink all day
and a jukebox reminisces in a cracked voice
there is nothing to say. You talk for hours
in agreed motifs, anecdotes shuffled and dealt
from a well-thumbed pack, snapshots. The smoky mirrors
flatter; your ghost buys a round for the parched,
old faces of the past. Never return
to the space where you left time pining till it died.
Outside, the streets tear litter in their thin hands,
a tired wind whistles through the blackened stumps of houses
at a limping dog. God, this is an awful place
says the friend, the alcoholic, whose head is a negative
of itself. You listen and nod, bereaved. Baby,
what you owe to this place is unpayable
in the only currency you have. So drink up. Shut up,
then get them in again. Again. And never go back.

The house where you were one of the brides
has cancer. It prefers to be left alone
nursing its growth and cracks, each groan and creak
accusing as you climb the stairs to the bedroom
and draw your loved body on blurred air
with the simple power of loss. All the lies
told here, and all the cries of love,
suddenly swarm in the room, sting you, disappear.

You shouldn't be here. You follow your shadow
through the house, discover that objects held
in the hands can fill a room with pain.
You lived here only to stand here now
and half-believe that you did. A small moment
of death by a window myopic with rain.
You learn this lesson hard, speechless, slamming
the front door, shaking plaster confetti from your hair.

A taxi implying a hearse takes you slowly,
the long way round, to the station. The driver
looks like death. The places you knew
have changed their names by neon, cheap tricks
in a theme-park with no name. Sly sums of money
wink at you in the cab. At a red light,
you wipe a slick of cold sweat from the glass
for a drenched whore to stare you full in the face.

You pay to get out, pass the Welcome To sign
on the way to the barrier, an emigrant
for the last time. The train sighs
and pulls you away, rewinding the city like a film,
snapping it off at the river. You go for a drink,
released by a journey into nowhere, nowhen,
and all the way home you forget. Forget. Already
the fires and lights come on wherever you live.'

(Never Go Back by Carol Ann Duffy)
No comments:

The mysterious concept of confidence

All over the newspapers today has been this story, about a beautician mother who spray-tans her four-year-old girl in order to 'give her confidence'. Often found near to this story is that of a little girl who had a red blemish removed from her nose so now she can lead a normal life; pictures of this girl show her with pierced ears and painted nails. She's three.
Naturally the mainstream tabloids were concerned about how glamourising young girls like this made them a ready target for paedophiles, without glossing over the primary issue here - why on Earth is a girl as young as three being taught to associate cosmetics with confidence, and a certain manner of appearance with what's socially acceptable, desirable, and the only way to be?
It continues to disgust me, this lack of diversity in the world. Or rather, the lack of tolerance for the alternatives. Children should be allowed to be children, and people to be people. I'll defend a woman's right to raise their child however they want, because God knows I couldn't do it. But this is the one that gets me - if a mother has found confidence through cosmetics and nothing else, should she teach her daughter the same method, in order to avoid her having to experience the crippling awkwardness of being a less-than-confident child? Should she protect her from youth make-up products, easy-to-apply fake tan and magazines like Cosmo, or let her form her own judgement after stumbling through the youthful minefield herself?
My mother never taught me how to put on make-up, epilate or wax, or how to dress for my shape and chose the right colours. I had to figure it all out myself. And I think that's what's the making of young people. The one person you don't want to learn from is the one person who could tell you everything, if you wanted to know. A personal project I'm working on intermittently at present touches on this. I don't think it's the business of a mother to force anything on a child, but I do think it's in a mother's interest to equip a child with every possible weapon against the things that will bring them down. As well as a bulging make-up bag and a natural affinity with Sun-In, the uprising against vile modern culture should begin in the home. Soon.
2 comments:
Newer Posts Older Posts Home
Subscribe to: Posts (Atom)