And finally we get the long-anticipated news that Mad Men Season 5 will premier in the spring. 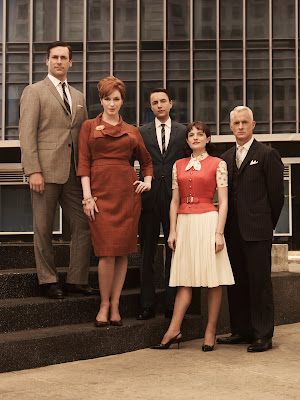 With the first episode directed by John Hamm himself, this season will pick up with the newly engaged Don Draper supposedly a reformed character. The series has been applauded the world over but some feel it's losing its sparkle with some more recent plot developments, soapy storylines and big, bombastic set pieces. But we universally agree that we can't wait to see it come back.
Here's what I've missed about Mad Men.
1) Joan's exquisite collection of jewel coloured suits.
2) The fact that even after four series, I still can't remember Kinsey's name without Googling it.
3) How weird yet oddly compelling Sally Draper is.
4) How much fun it is to hate Betty.
5) Peggy's one-liners: 'Your boyfriend doesn't own your vagina!' 'No, but he's renting it.'
6) Roger Sterling's uncanny ability to say the wrong thing at the wrong time.
7) Lane Pryce.
8) The occasional rare moment where it looks like Pete Campbell isn't a total and utter asshole.
9) Every other moment where Pete Campbell is quite clearly what Draco Malfoy will grow up to be.
10) Wondering what Don would look like without a combover.
11) Seeing if this will be the day where anyone wears a different suit.
12) How amusing it is to listen to modern ad men compare themselves to the SCDP crowd.
13) Wondering at whether most of the adverts created in the '60s were done by a bunch of drunks.
And what I won't miss about Mad Men...
1) When the fashion pages start printing their 'dress like Betty Francis' spreads.