It's sunny, it's spring, it's payday, and I just found the best GIF ever.

Have good weekends!
No comments:

Marina (and her Diamonds) may have been called pretentious (inevitably by fans of Florence + The Machine) but she's got a hella catchy way with music. I can't wait for her new album, and this stand-out track.
'Electra Heart' (featuring a suitably 'Marie Antoinette as envisioned by Sofia Coppola' cover) is due for release at the end of April.
No comments:

Stylist's latest cover reminded me of a very important and glaring omission I made from my Inspiring Women list... 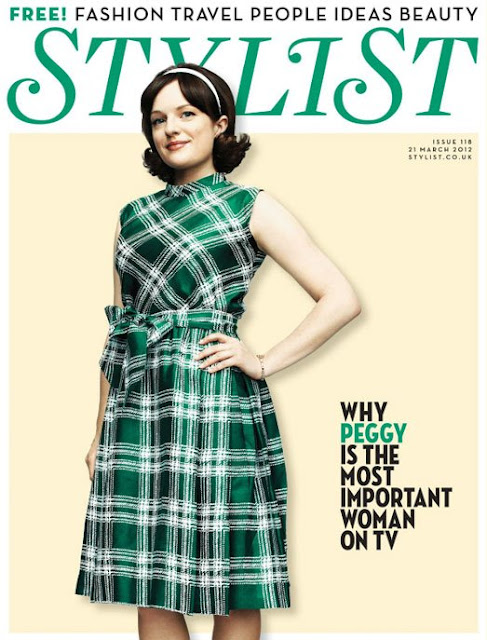 Peggy is a feminist icon by accident, because she scales the career ladder flawlessly while just happening to be a woman. When she gives up her baby at the start of Season 2 to pursue her career, she makes a choice unconsciously facing many modern women (who, thankfully, mostly avoid the pregnancy altogether thanks to modern medicine) but also a choice to prioritise work over every other obligation that faces many people, male and female alike. She displays assurance, perseverance, determination and steely resolve. She is innovative, quick and clever, asking all the right questions and learning from all the mistakes she makes.
And all this is made more noteworthy because she's a woman.
Peggy is a feminist icon, there's no doubting it. But (as Lucy Mangan points out in her excellent Stylist piece) she does this in a time before feminism even existed. Peggy saw what she wanted and went for it, through hard work and determination. The fact that she becomes a (albeit fictional) trailblazer as a result of her possessing ovaries is of tantamount importance. But Peggy's story is inspirational to everyone - young and old, male and female. The story of a determined and committed young person learning, making mistakes and learning some more, seizing opportunities, and never being content with anything less than what she wants.
No comments:

You GO, Girl on Fire

I have a huge raging crush on Jennifer Lawrence and I cannot wait to see The Hunger Games.
That is all.

So yesterday (8th March 2012) was, by my count, the 101st International Women's Day. Smarter ladies than me have talked about the significance of this day and what it means to modern women, so I won't do that.
Instead, I'll tell you about the women who inspire me.

1. Annie Lennox - If I had to pick one woman of all the women who've been to meet, I think it would be her. Her voice accompanied much of my youth, her look has inspired mine and made it acceptable for a woman to mess with the perception of feminity. She is probably the only woman that could ever appear on Cosmopolitan's cover in full Bowie-esque make-up. She campaigns tirelessly for whatever cause she believes in, and continues to make beautiful music. She is a mother, a musician, a performer, possessed of an incredible voice and is a full-on, 100% megawatt superstar.

2. Joan Jett - Similarly blasting her way up the musical ladder, forty years after her career began, challenging the perception of sensuality and sexuality, looking utterly badass in leather catsuits, rocking a mullet and writing some utterly great rock records.

3. Miranda Hobbes - sure she's fictional, but she's the greatest career woman, and redhead, ever to grace the small screen. A killer career, a great home and a family; she's the one who you never believed would want it all who managed to get it. Plus (again I know she's fictional) the amount of different looks she could get out of that red crop of hers puts me to shame.

4. Ellen MacArthur - I remember watching the documentary filmed when she set the record for round-the-world solo sailing. This was before I could watch the internet trolls rip her apart online, and when all I saw was an extremely brave, skilled and determined young women setting the standard.

5. Donna Tartt - The Secret History remains my favourite novel, and it's more extraordinary as it's her first. Her skill at maintaining the book's neutral tone of observing only and letting us judge for ourselves, while also being appropriately masculine, is not to be sniffed at. I'm excited for her third book.

6. Carol Ann Duffy - I got into Carol Ann Duffy relatively recently but her poetry fascinates me in the same way that Tartt's prose does; timeless, ageless and someone strangely sexless, veering deliberately from masculine to feminine. Plus, White Writing is one of the most beautiful declarations I've ever read.

7. Jojo Harvey - this one is a) fictional and b) slightly cringeworthy as she is a character from a Marian Keyes novel. For those of you not familiar with her, she is described as looking like a living Jessica Rabbit. She is a 'high-flying literary agent' with buckets of chutzpah. And (aside from a certain ill-advised relationship) I kind of want to be her.

8. Emma Thompson - a classic British luvvie and one of our most versatile actors (plus the only person to win an Oscar both for acting and screenwriting). Similarly a campaigning queen like Annie Lennox, known to say stupid things occasionally but also known for being honest, genuine and sensible (and, according to the Guardian, 'refusing to be grand' by shunning plastic surgery. *Headdesk*). She's the perfect example of the best of British women - self-assured, well-spoken, timelessly beautiful and uncompromisingly real. Plus, by including her I get an excuse to post numerous pictures of her phenomenal turn as the Angel America in Angels in America. 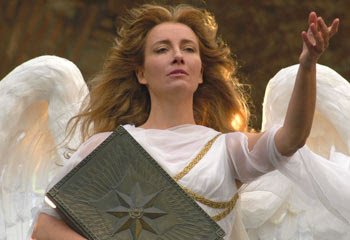 9. My grandma - My maternal grandmother still goes to the gym three times a week, still drives the four-hour journey to visit us over Christmas, has an MBE for services to special needs education (after sitting on a board of a special needs school), ran her own travel business while raising my mum and uncle, and works an all-black wardrobe as well as Coco Chanel. She is a powerhouse and if I have half her energy at her age, well...watch out.

10. My mum -  Does anyone remember being read a book called Isn't She Clever? about all the roles a mum fulfils on a daily basis (doctor, chef, taxi drive, handywoman, etc?) It's a shame that book appears to have gone out of print as it's more relevant now than ever. The book ended with a list of all the roles a mum fulfils and concluded with the ever-so-slightly patronising statement 'Isn't she clever?'
My mum is an activist, a worker, an A-grade chef, a gym queen, a library curator and culture vulture. Graduating from a male-dominated course and making her way in a male-dominated industry, stopping to have kids and then pretty much seamlessly making her way back into work. She is the one who is always (without knowing it) pushing me forward and my burning ambition in life is to make her and my dad proud. Isn't she clever? 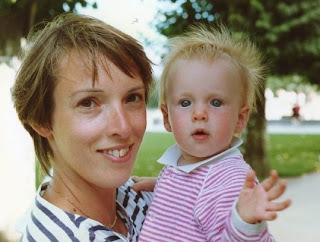 Now go forth and inspire. Be it your daughter, someone else's, the women of the world or just the women you know, make sure at least one person includes you on their version of this list.
1 comment:

Being the investigative type that I am, and a former, albeit poor, history student, I know the importance of reading source material. So when the latest issue of Cosmopolitan appeared on a colleague's desk I jumped at the opportunity to go behind enemy lines.
From the soft porn image of Holly Willoughby staring, slack-jawed and glassy-eyed, from the cover, I knew I was in for a treat. But this was a serious investigation.
So I resolutely ploughed through the magazine, barely batting an eyelid at such gems as Jameela Jamil decreeing Beyonce the ultimate feminist because she doesn't let anyone dictate what she wears, reading the 'heart-breaking' human interest story and reading page after page of identikit beauty tips. Then I reached a page entitled 'Beauty's Only Skin Deep', which revealed the findings of Cosmo's Body Beautiful survey. Naturally, said findings totally debunked the title of the infographic, as the whole thing is about how women, and men, most want women to look. But one stat in particular caught my eye. According to Cosmo, 66% of women would rather look like supermodels but with £16k salaries, while the remaining 34% would prefer more money and fewer second glances. (The men surveyed split 61/39 in favour of the more moneyed women, but Cosmo notably changed the wording from 'hate how you look but earn more' to 'average looks and a high salary'.)

(Image via Google)
This is a conundrum alright. Should I be outraged that Cosmo's surveyed female readership don't understand the concept of money and believe that looks fix everything? Should how I hold resentment for my ovaries  to forever cursing me to be lumped in with these airheads?
Should I direct my anger at the seeming scroungers who would prefer an average-looking bird with a big salary that they could rely on to cover rent while they use theirs to go out and hit on the 66% spending their few pennies on one long, lingering drink in the pub until one of the 39% buys them another?
No. I'll hate the sin.
Maybe the 66% are on to something. No, I know the 66% are on to something. We are judged by our looks from Day One - blame the baby beauty pageants, and the fact that we naturally gravitate to the beautiful creatures - so why should we except anything different from our biology as we grow? The 66% are adopting the 1966 approach (Betty, not Peggy) that good looks and a non-threatening career trajectory are the best bet for doing what they have been told by the womens' mags is the most important thing - attracting a man. And not just in the bar, but in the boardroom too. A piece in Grazia pointed out that the average starting salary for men is £45k but for women it's £26k - if the men setting these salaries get word (by means of Cosmo's salary review campaign, perhaps?) that hot women will work for less, what a mess we'll be in.
By far the most fundamental result of the Cosmo survey shows just how obsessed women are with looks, but it also shows how much we'd prefer to be happy in ourselves than rich enough to mask it. If the majority of women would choose to live in poverty, at peace with her body and her looks, over living in wealth but hating herself, then we've got an unwittingly heartbreaking picture of how deep-seated body confidence is to happiness. Unwittingly, one of the biggest attackers of our self-esteem has held a mirror up to this action, and shown us just how desperate the average woman is to look good. That she'd sacrifice financial security for it. Perhaps shelling out what could have been a deposit on a house, a car, pension money...for a boob job, because she believes that it will solve all her problems.
I wonder where she got that idea from.
2 comments:
Newer Posts Older Posts Home
Subscribe to: Posts (Atom)