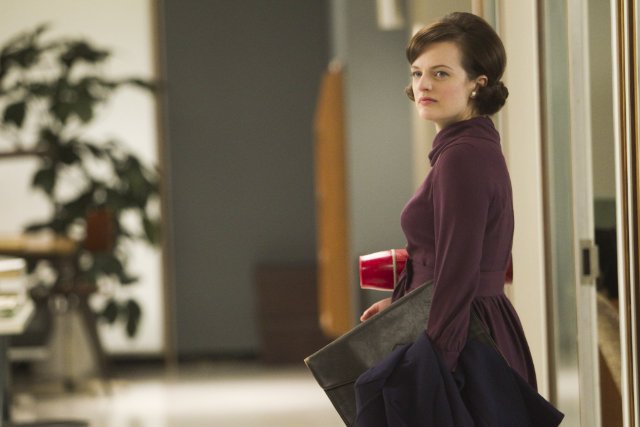 I remember that day all too well.
After a frustratingly slow start to the season, finally a firecracker of an episode that delivers not one but two phenomenal shocks. While the second is too scandalous to spoil, the first and foremost resonated for me for a variety of reasons.
Ever my role model (except for that unfortunate incident when she had Pete 'Weasel' Campbell's baby) the formidable, resourceful, razor-sharp and painfully human Peggy Olson's career trajectory was the feminist front of the series, and while we were drooling over Betty's outfits and drooling over Joan, it was Peggy that we were meant to want to be. And while the housewife life never had much a draw, Peggy's regular toe-to-toes with Don and co, ability to drag the business back from the brink of ruin and thoroughly modern attitude to dating has been a path even girls living sixty years later can follow.
But finally, and with impeccable timing, it was time for a star who had been eclipsed by Don's ambition and greed to move on to pastures new. In true Peggy diplomacy it was dignified, quiet, measured and yet filled with emotion. Even clueless, arrogant Don, convinced he could buy back his former protege in the way he did before, was floored. And demonstrating both his inner chauvanism and total devotion to Peggy by, instead of shaking her hand, kissing it in the way you'd kiss that of a woman you just met in a bar and also that of a figure to be adored, revered and not able to meet the eye of.
Several months ago, I remember having the same conversation as Peggy with my version of Don - the dynamic mentor figure who gave me my first shot. And it gives me great satisfaction to see Peggy finally deciding, after months of frustration, to take a leap of faith. And similarly the writers, who have made a bold move. Let's see how it pays off for both parties.
In the mean time, good luck to the indomitable Miss Olson.
No comments:

Sorry I've been absent, blog fans - it's been a busy old month and finally complete with some sunshine! In the mean time before I churn out a decent post, here's two fabulous outfits on two awesome ladies at the On The Road premier in Cannes. Kristen is so god damned cool with her shades in her hair and her nonchalance.

I'm still ploughing my way through this book in time for the film's release - it's pretty suitable reading for hazy (whisper it) summer afternoons in the park.

I might have to do this every Friday.
No comments:
Newer Posts Older Posts Home
Subscribe to: Posts (Atom)