So the latest high end/high street collaboration has dropped, the mad queues have died down and the swag posts have started to appear. I don't normally go in for all that as in my mind I much prefer a good design to a must-have label. My only piece from a collaboration collection so far is the alligator/crocodile dress Christopher Kane did for Topshop. Until... 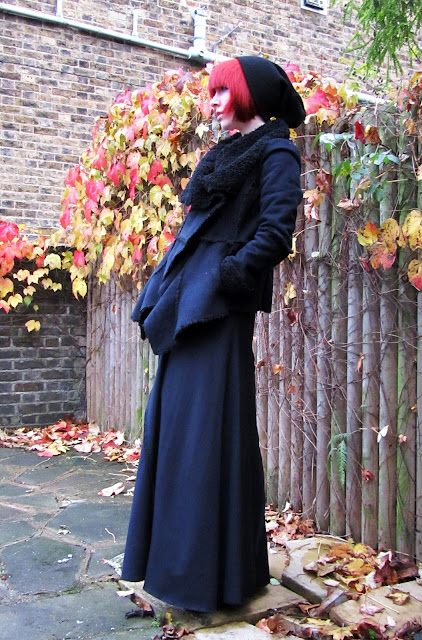 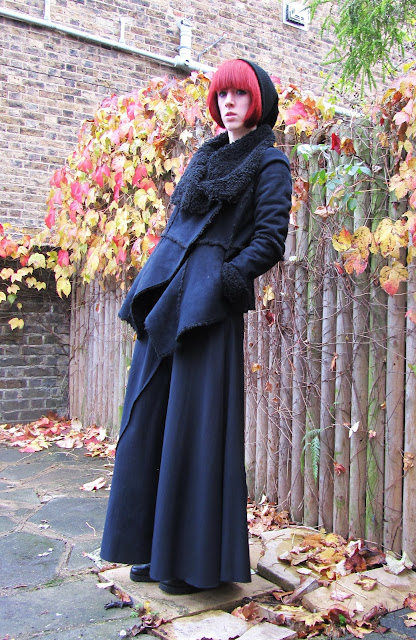 Amongst the hideous 'duvet' coats and truly hilarious jeans was this stunning navy skirt, cut from a pair of tailored trousers and the perfect expanse for swishing. 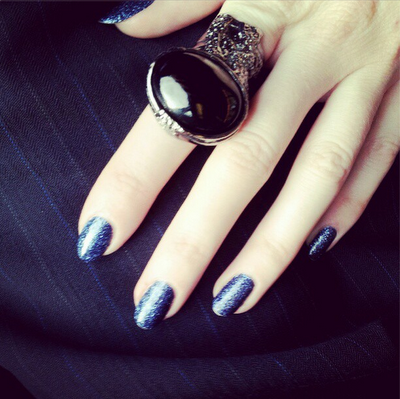 A close-up of the skirt's fabric, which goes perfectly with my Nails Inc manicure (yes, I got an actual manicure to see what all the fuss was about. Quite honestly, I could have done just as good a job myself!) and YSL ring.
PS For more manicure shots and day-to-day photos, follow me on Instagram!
No comments: 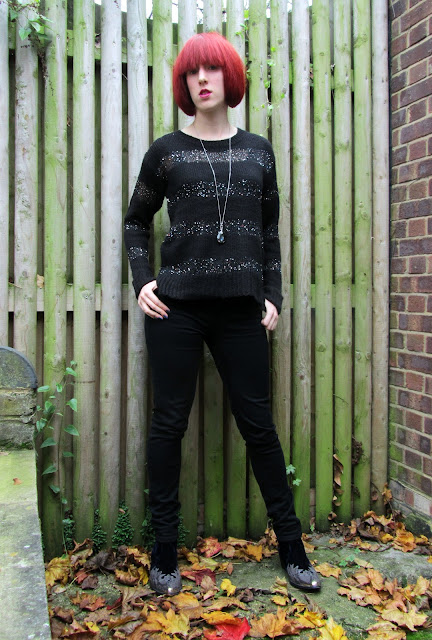 I bloody love Primark sometimes - I've been eyeing up a lovely draped black jumper in Miss Selfridge (as part of their Project #3 label) but at £45 it seemed a little steep. And then Primark brought out this decent and decidedly budget replica. Maybe I should have picked a size bigger, but it'll look better with skirts this size. And I'll be keeping an eye out for the sales in Miss Selfridge...
No comments: 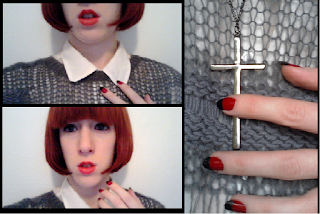 I'm getting into this very rudimentary collage presentation style. Though it is made in Paint because I am too poor to own anything like Photoshop (I don't even have Word).
A very old knitted sweater from Topshop and a sheer white shirt meant it was a tad chillier on a wet autumn day in London. But at least, unlike last year, my hair can keep my ears warm.
Trying the two-tone nail trend out by utilising a little sellotape. I suggest you try to avoid doing it in dim light as you make a right mess. Another suggestion? Illamasqua in Scorn is the perfect tone for use on the tips.
No comments:

And I'm not even a Downton fan. Ever since seeing her play Susan in the Sky adaptation of Hogfather I've dreamed of coming back as her in my next life. Flawlessly beautiful but blissfully unique, non-traditional. And with those eyebrows.

(Images via Grazia from a shoot with Interview magazine)
No comments:

In defence of Gossip Girl

Ok, confession time. While my television watching habits do stick closely to what's acceptable at the Emmys and among the highbrow (Mad Men, Game of Thrones, Homeland, earlier seasons of True Blood and more recently Breaking Bad) I'll always have a place in my heart for the work of Josh Schwartz. The man who launched the careers of Mischa, Rachel, Adam and Benjamin, and more recently Blake, Leighton, Ed, Chase and Penn. That's right, I'm a sucker for the Upper East Side and I'd love for Sandy to teach me to surf. Oh yeah.
While everyone agrees that The O.C. wasn't the same after Marissa died and even I'll admit Gossip Girl jumped the shark a good few seasons ago (somewhere between the dodgy French accents, the lack of an actual baby bump and the fact that we were somehow still supposed to sympathise with the clueless blonde one), there is still enough in the old horse yet for them to keep flogging it, although the current season of Gossip Girl will rightfully be its last as the plots get more and more hackneyed and the one-liners lose their zing.
While the fashion mags wax lyrical over the designer dream wardrobes, I was always more a fan of the grunge look sported by Taylor 'I'm in a band' Momsen's character, but my true fashion crush of the entire series was and is Michelle Trachtenberg. 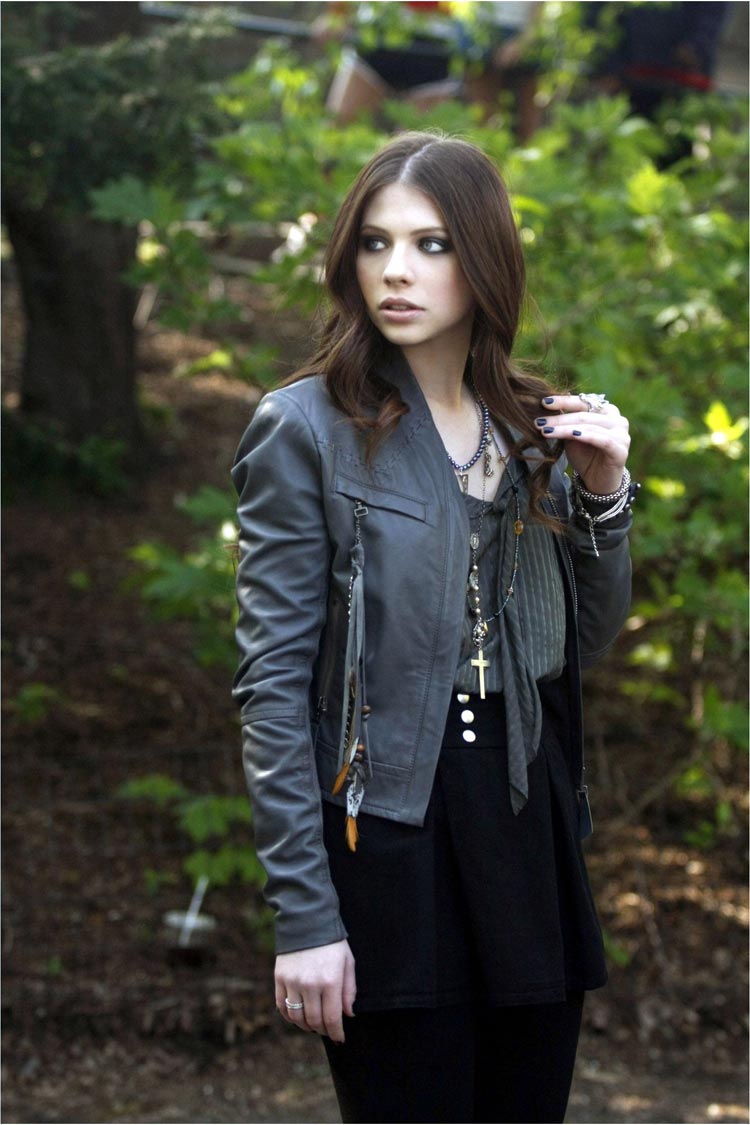 Oh come on, how could you not? That glossy, that flawless skin and perfectly applied eye makeup. I'm still trying to learn how to raise one eyebrow in quite the same pitying manner she does, and that's before we even get into the beautifully scripted brand of evil genius she brings to the show. So long as she sticks around, I'm still in.
And also, like The OC before it, Gossip Girl's ability to send a band stratospheric is not to be sniffed at. Phantom Planet may have had a following, but there's nothing like a glossy teen show to rope in the lucrative glossy teen market. While Gossip Girl has no theme song or glossy opening credits, the music choices throughout the show are often smart and often inspired. Months before it hit the radios (around a year ago, in fact), a little-known track called Somebody That I Used To Know was featured in the fifth series of Gossip Girl, Gotye's earlier hit Heart's A Mess having appeared on the show before. Within minutes of the episode ariring, 'like if Gossip Girl brought you here' comments were popping up all over YouTube, exposing this brilliant band to an even bigger fanbase who were ready and waiting when the album launched this year. A year later, the song is a global hit and stands the test of time as an outstanding popular track.
The show has also introduced me to bands I now adore such as White Lies, featured a performance of No Doubt covering Adam and the Ants' Stand And Deliver years before it finally made it onto the new No Doubt album, and had me humming Edward Sharpe & The Magnetic Zeros' Home for a whole summer. While the plotlines get woolly, the cameos cringeworthy (though Liz Hurley's outrageously hammy British accent was a laughable delight) and the fashion gets tired, the show still has the ability to deliver standout song choices. Case in point, this track from the closing scene of the most recent episode, by a band called Stepdad. This track is from their latest album, available in the US in June. Hope it makes it over to the UK soon.
No comments: 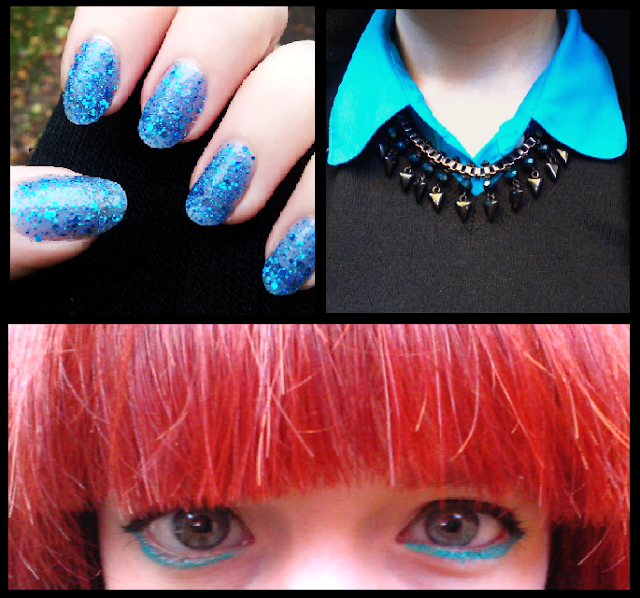 (Featuring nail polish from Louise Gray for Topshop (which I've layered in about seven coats before realising I had a turquoise that could have done as a base coat), a new necklace with a gorgeous chunky chain link design from Topshop and a turquoise shirt from American Apparel, and immovable liquid eyeliner from MAC.)
Depending on what you read, turquoise is my birthstone. I've also read lapis, so basically I should stick with blues. And while it does get a tad boring sometimes, blue, and turquoise in particular, do wonders to bring out red hair.
No comments: 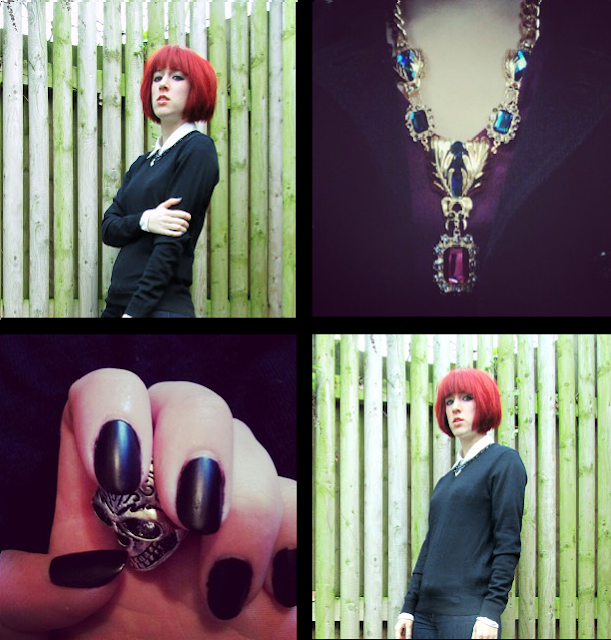 Juxtaposing today's relatively simple outfit with the mother of all statement necklaces (a hunk of metal, beads and bugs from ASOS) and my new favourite nail polish - Scorn by Illamasqua, which is a matte black. I do buy rather a lot of nail polishes (even though, for some reason, Selfridges no longer stocks OPI) and pick favourites regularly but this is the current, despite loving the turquoise glitter I've got on at the moment. Glitter nail polish is a pain to take off, but the technique of wrapping your fingertips in remover-soaked cotton pads and tin foil really works.
No comments: 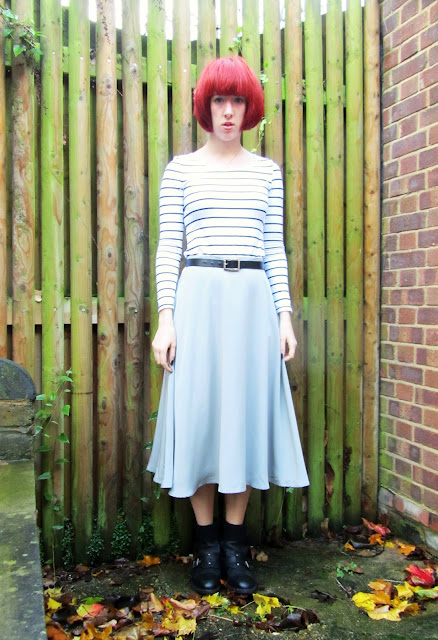 It was quite a dramatic fringe. That's the trouble with a fringe - it only looks amazing two weeks out of the four between cuts, it's too short the first week and in the fourth week you look like an Old English sheepdog. C'est la vie.
I got this skirt in the American Apparel sale at the end of the summer. I should have bought it in lots more colours; it's the perfect shape for me and very versatile (though as I learned over the course of the day it really needs a slip to stop it sticking to tights). Ah well, nothing wrong with a light grey. 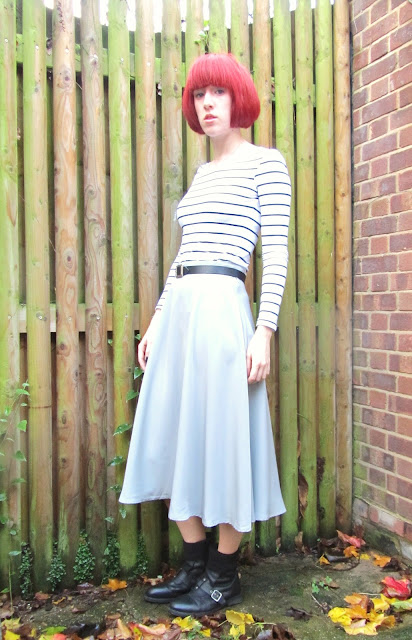