The Year We Got Violent 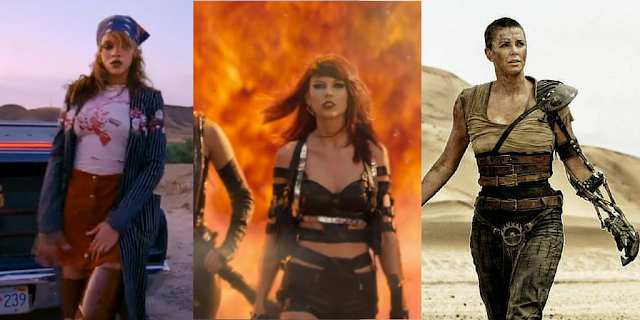 Three crucial pop culture events have happened over the past few months that have garnered global media attention, generated furious social media frenzy and spawned a thousand think pieces. They all feature women and they all made massive marks on the industry they're in and the conversation they're dominating. And they all featured women committing acts of violence.

Ripping a man's internal organs out through his breathing apparatus. Delivering a knockout blow in the face to their BFF. Committing an act so gruesome on a man that they didn't even show it on camera. Pushing a woman out of a window. Arming an army of women in a mission to bring down their foe, with rocket launchers, samurai swords, guns and knuckledusters. Hurting men, hurting women, hurting friends, hurting foes.

It's fair to say that of the three examples depicted above, Rihanna's tribute to excessive mob violence tropes has caused far more upset than Taylor's sexualised superheroes or Charlize Theron's army of accidental Valkyries (on a related note, if you haven't seen Mad Max: Fury Road, do yourself a favour - I am yet to be more entertained by a film at the cinema possibly ever and I've seen it twice). Sure, suspending a woman from the ceiling of a derelict warehouse while you blackmail her (famous) husband into paying you up isn't exactly PG-13 viewing. But what's got us so angry about it exactly compared to, say what Charlize does to her ultimate foe in Mad Max, or when another woman pushes Taylor out of a window and she then conveniently gets resurrected as a scantily-clad ass-kicking weapon of vengeance? Is it because she's relegating the unfortunate female hostage to the position that so many of our kind have been in in mob movies, cop show after cop show and even in the superhero comic-book world Taylor's video is supposedly emulating (a cross between a higher budget version of Britney's Womaniser, Sin City the 12A version and The Lonely Island's Cool Guys Don't Look At Explosions, adding up to a stylised tribute to two areas that have long been torn down as examples of neanderthal gender roles and excessive violence as standard - comic books and superheroes)? A fair criticism. One that we would definitely level against a male director and a male singer who dared to make the same video.

Is it because Rihanna has made this video and is a woman that we can elevate her beyond criticism for it for successfully inserting herself into the trope of gangster? For all the violence, partial nudity and excess, I am strongly inclined to believe that part of the ire that has come from this video is that Rihanna is behaving in it in a traditionally masculine way, at least as far as the style of film she is supposedly emulating is concerned. If the hostage was male, we'd clap our hands at the 2015 revival of Thelma and Louise. As Taylor's video shows, women can do bad things too. Just because we're all possessing of the same gender identity doesn't automatically chalk us up for good behaviour. And it also doesn't chalk us down to only partake in a certain type of aggression, either.

When Mad Max blasted onto the screens we encountered a series of screen sirens who entered the film's world purely as physical possessions, the walking personification of all that is desirable and all that is feminine, like a Michael Bay fantasy come to life (and yes, the fact that a former leading lady of his stars here is not lost on me). Then, instead of using their sexuality to entrap their prey, they simply pick up the same weapons as the men do. Maybe that's what Rihanna is doing - using the violence commonly associated with all that is masculine and turning that weapon to her advantage as well. (As a victim of violence herself, I would imagine that revenge fantasies are writ large.)

Of course, these are all just films. Music videos. Seemingly inconsequential pieces of pop culture that will be torn apart by pearl-clutching Guardianistas and Mail readers and drooled over by Reddit readers and red-blooded human beings. But perhaps we can also count it as refreshing that, while entertaining us with depictions of unspeakable things, the three examples are at least (in varying degrees) doing their bit to bust out the big guns on behalf of the gender that doesn't often get to partake in some good old-fashioned ultra-violence.